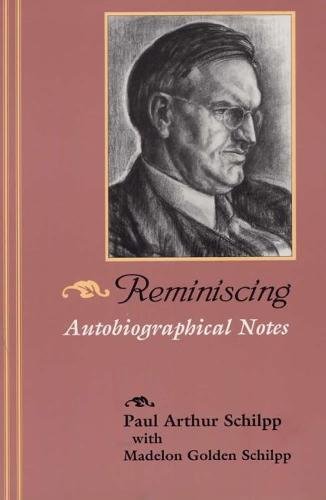 "This autobiographical reminiscing started more than ten years ago," wrote German-American philosopher Paul Arthur Schilpp at the age of ninety-five. "After my retirement in 1981," he continued, "I began dictating fragmentary memoirs off and on. Belatedly I was realizing how useful it might have been to have kept personal journals over the long span of my lifetime."

"But in years of wonderful vitality, which miraculously had continued into my eighties," Schilpp explains, "I was caught up with living life from moment to breathless moment. Rush there and lecture someplace. Rush home and write or edit against the next impending deadline. The professional merry-go-round was ever enchanting. The days whirled by. And now; in the quieter years between eighty-four and ninety-five, I have recalled what seems most important from the recesses of my mind."

And the record is indeed important. Schilpp knew the greatest minds of this century.

Widely recognized as a scholar and teacher, he created the Library of Living Philosophers—called the greatest work in philosophy during this century—and served as editor for forty-two years.

Schilpp also served as president of the American Philosophical Association and was consultant in philosophy to the Encyclopædia Britannica for over thirty years. He enjoyed a long and distinguished career as both teacher and scholar, primarily at the University of the Pacific, Northwestern University, and Southern Illinois University at Carbondale.

Paul Arthur Schilpp is the author of such works as Kant’s Pre-Critical Ethics, Human Nature and Progress, The Crisis in Science and Education, and The Quest for Religious Realism. His awards include the Gold Medal of Phi Beta Kappa and the first Bertrand Russell Society Award.

Madelon Golden Schilpp, wife of Paul Schilpp, is author (with Sharon Murphy) of Great Women of the Press, also available from Southern Illinois University Press. Madelon Schilpp has been a member of the journalism faculty at Southern Illinois University at Carbondale, a reporter for the Chicago Sun-Times, and a contributor to the Chicago Tribune and the St. Louis Post-Dispatch.