Items related to The Alchemy Of Stone

Sedia, Ekaterina The Alchemy Of Stone

The Alchemy Of Stone 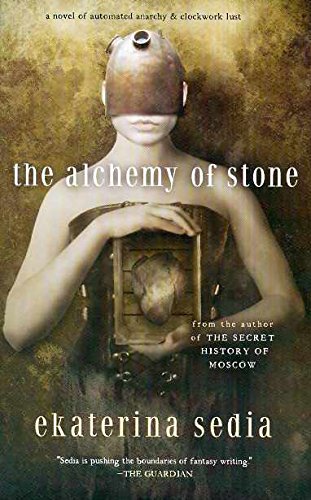 Starred Review. Sedia's evocative third novel, a steampunk fable about the price of industrial development, follows Mattie, an emancipated automaton, as her home city is rent by conflict between alchemists and the mechanics whose clanking, steaming inventions are changing society. Though created by a leader of the mechanics, Mattie chose to join the alchemists, but her creator still holds the key that winds her up. When a terrorist bombing and an assassination touch off all-out war between the two factions, she discovers the ugly secrets and exploitation that keep the city supplied with food and coal. Sedia's exquisitely bleak vision deliberately skewers familiar ideas from know-it-all computers to talking statues desperate for souls, leaving readers to reach their own conclusions about the proper balance of tradition and progress and what it means to be alive. (Aug.)
Copyright © Reed Business Information, a division of Reed Elsevier Inc. All rights reserved.

1. The Alchemy Of Stone