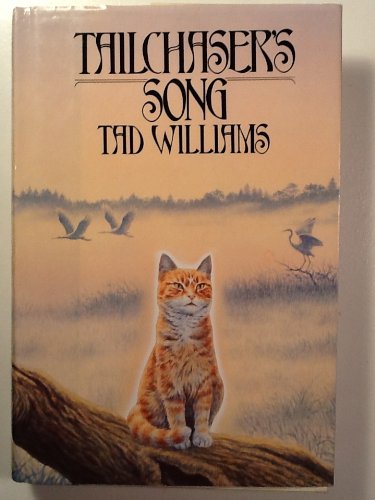 Fritti Tailchaser, a ginger tomcat of rare courage and curiosity, embarks on a quest to rescue his cat friend, Hushpad, a dangerous and magical journey that leads him into a nightmare world from which only his own resources can deliver him, in a fifteenth anniversary edition of the fantasy classic. Reissue.

Tad Williams has held more jobs than any sane person should admit to—singing in a band, selling shoes, managing a financial institution, throwing newspapers, and designing military manuals, to name just a few. He also hosted a syndicated radio show for ten years, worked in theater and television production, taught both grade-school and college classes, and worked in multimedia for a major computer firm. He is cofounder of an interactive television company, and is currently writing comic books and film and television scripts as well. Tad and his family live in London and the San Francisco Bay Area. You can find Tad Williams at tadwilliams.com.

In the Hour before time began, Meerclar Allmother came out of the darkness to the cold earth. She was black, and as furry as all the world come together to be fur. Meerclar banished the eternal night, and brought forth the two.

Harar the Goldeneye had eyes as hot and bright as the sun at the Hour of Smaller Shadows; he was the color of daytime, and courage, and dancing.

Fela Skydancer, his mate, was beautiful, like freedom, and clouds, and the song of travelers returned.

Goldeneye and Skydancer bore many children and raised them in the forest that covered the world at the beginnings of the Elder Days. Climbfast, Wolf-friend, Treesinger, and Brightnail, their young, were strong of tooth, sharp of eye, light of foot, and straight and brave to their tail-ends.

But most strange and beautiful of all the countless children of Harar and Fela were the three Firstborn.

The eldest of the Firstborn was Viror Whitewind; he was the color of sunlight on snow, and of swiftness....

The middle child was Grizraz Hearteater, as gray as shadows and full of strangeness....

Third-born was Tangaloor Firefoot. He was as black as Meerclar Allmother, but his paws were red like flame. He walked alone, and sang to himself.

There was rivalry among the Firstborn brothers. Whitewind was as fast and strong as a cat could dream of being—none could overmatch him at jumping and running. Firefoot was as clever as time; he solved all puzzles and riddles, and made songs that the Folk sang for generations.

Hearteater could not match his brothers' exploits. He grew jealous, and began to plot the downfall of Whitewind and the humiliation of the Folk.

So it came to pass that Hearteater raised up a great beast against the Folk. Ptomalkum was it's name, and it was the last spawn of the demon-hound Venris, whom Meerclar had destroyed in the Days of Fire. Ptomalkum, raised and nurtured with Hearteater's hatred, slew many Folk before it was itself slain by the gallant Whitewind. But Viror Whitewind received such wounds that he soon wasted and died. Seeing the downfall of his schemes, Hearteater was afraid, and crept down a hole and disappeared into the secretive earth.

There was great lamentation in the Court of Harar at the death of Whitewind, the best-beloved. Firefoot his brother fled the Court in heartache, renouncing his claim to the Mantle of Kingship, and wandered the world.

Fela Skydancer, Whitewind's mother, was ever after silent, all her long life.

But Harar Goldeneye was so full of rage that he wept, and swore great oaths. He went howling into the wilderness, destroying all before him in his search for the traitorous Hearteater. Finally, unable to bear such great pain, he fled to the bosom of the Allmother in the sky. There he still lives, chasing the bright mouse of the sun across the heavens. Often he looks down to earth below, hoping to see Viror running once more beneath the trees of the World-Forest.

In the days of Prince Cleanwhisker, in the reign of Queen Morningstripe, Lord Tangaloor came to the assistance of the Ruhue, the owl-folk. A mysterious creature had been pillaging their nests, and had killed all the Ruhu hunters who had come against it.

Firefoot laid a trap, clawing away at a mighty tree until it was near cut through, then lay in wait for the marauder.

When the creature came that night, and Firefoot felled the tree, he was astonished to discover that beneath it he had trapped Grizraz Hearteater.

Hearteater begged Firefoot to free him, promising that he would share the ancient lore that he had discovered beneath the ground. Lord Tangaloor only laughed.

When the sun came up, Hearteater began to scream. He writhed and screeched so that Firefoot, although fearing a trick, liberated his suffering brother from beneath the pinioning tree.

Hearteater had been so long beneath the earth that the sun was blinding him. He clawed and rubbed at his steaming eyes, howling so piteously that Firefoot looked about for a way to protect him from the burning of the day-star. But when he turned away, the blinded Hearteater dug himself a tunnel, more swiftly than any badger or mole. By the time the startled Firefoot bounded over, Hearteater had disappeared back into the belly of the world.

It is told that he still lives there, hidden from the eyes of the Folk; that he works foul deeds underground, and aches to return to the World Above....