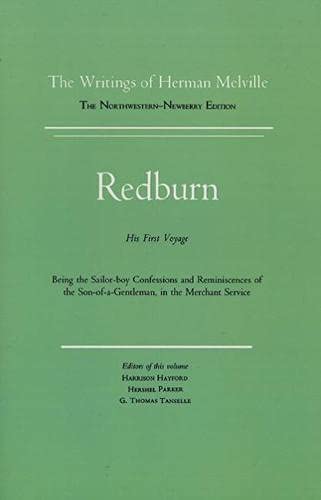 Redburn is a fictional narrative of a boy's first voyage, based loosely on Melville's own first voyage to and from Liverpool in 1839. Hastily composed and little esteemed by its author, Redburn was more highly thought of by his critics, who saw it regaining the ground of popular sea stories like Typee and Omoo.

Melville so disliked the novel that he submitted it to his publisher without polishing it. This scholarly edition corrects a number of errors that have persisted in subsequent editions. Based on collations of the editions published during his lifetime, it incorporates corrections made in the English edition and emendations made by the present editors.

As with all the books in the Northwestern-Newberry series, this edition of Redburn is an Approved Text of the Center for Editions of American Authors (Modern Language Association of America).

Drawn from Melville's own adolescent experience aboard a merchant ship, "Redburn charts the coming-of-age of Wellingborough Redburn, a young innocent who embarks on a crossing to Liverpool together with a roguish crew. Once in Liverpool, Redburn encounters the squalid conditions of the city and meets Harry Bolton, a bereft and damaged soul, who takes him on a tour of London that includes a scene of rococo decadence unlike anything else in Melville's fiction. In her Introduction, Elizabeth Hardwick writes, ""Redburn is rich in masterful portraits--a gallery of wild colors, pretensions and falsehoods, fleeting associations of unexpected tenderness. . . . "Redburn is not a document; it is a work of art by the unexpected genius of a sailor, Herman Melville."
This Modern Library Paperback Classic is set from the text of the first American edition of 1849.

“Redburn, recalling the cruel memories of [Melville’s] youth, was the first bitter cry of his maturity. . . . The book has the wry humour of the grown man. . . . Redburn was a victory.” —Lewis Mumford