Items related to Dear Friends: American Photographs of Men Together... 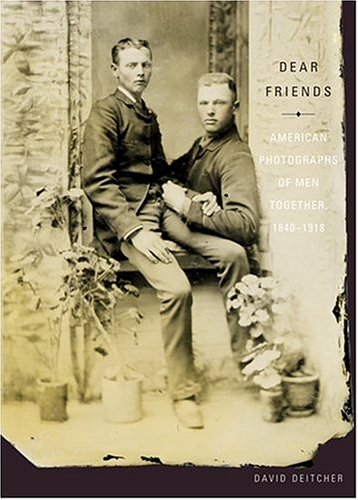 Dear Friends is the first book to demonstrate how common it was for 19th-century American men to commemorate intimate friendships with a visit to the local photographer. Reproducing more than 100 never-before-published vintage photographs, this groundbreaking book provides evidence of a kind of physical intimacy between men that challenges the conventional view of the Victorian era. David Deitcher's provocative text combines historical research, social observation, and pictorial analysis to explore the nature of same-sex affection between men during the period.

Dear Friends: American Photographs of Men Together, 1840-1918 collects more than 100 portraits--from daguerreotypes to cartes des visites and early photographic postcards--depicting affectionate male friendships whose precise nature, whether platonic or sexual, will never be known. Editor David Deitcher, who teaches art and critical theory at the Cooper Union, reflects on the history of these images and their possible significance. In the late Victorian period, he notes, men commonly established intimate, passionate friendships with other men, and often "posed for photographers holding hands, entwining limbs, or resting in the shelter of each other's accommodating bodies, innocent of the suspicion that such behavior would later arouse." These photographs have long been collected by gay men, for whom they are vehicles of longing "for the self-validation that comes from having a history to refer to; longing for a comforting sense of connection with others--past as well as present--whose experience mirrors one's own." Nevertheless, Deitcher reminds readers, because almost all the subjects of these photographs are anonymous, "they are powerless to communicate anything more than the following: This is how these men looked on that day when they sat for the photographer." But what these photographs prove is ultimately far less interesting or engaging than what they are: tender, funny, strange relics of a time when public expressions of love between men were freer and more natural than they are in our own ostensibly more liberated age. --Michael Joseph Gross

Born in Montreal, Canada, David Deitcher is a writer, art historian, and critic whose essays have appeared in Artforum, Art in America, Parkett, the Village Voice, and other periodicals, as well as in numerous monographs and anthologies. He was the editor of The Question of Equality: Lesbian and Gay Politics in America Since Stonewall (Scribner, 1995). Since 1992 he has taught art and critical theory at The Cooper Union in New York.