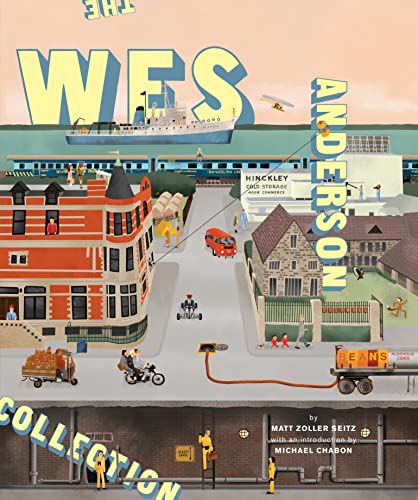 The result is a meticulously designed book that captures and reflects the spirit of Wes Anderson's movies: melancholy, playful, wise, and wonderfully unique.

Matt Zoller Seitz, a finalist for the Pulitzer Prize in criticism, is the TV critic for New York Magazine and Vulture.com, as well as the editor-in-chief of RogerEbert.com.

A Brooklyn-based writer and filmmaker, Seitz has written, narrated, edited, or produced more than a hundred hours' worth of video essays about cinema history and style for The Museum of the Moving Image and The L Magazine, among other outlets. His five-part 2009 video essay, "Wes Anderson: The Substance of Style," was later spun off into a New York Times bestselling hardcover book series: The Wes Anderson Collection (Abrams, 2013) and The Wes Anderson Collection: The Grand Budapest Hotel (Abrams, 2015).

Seitz is the founder and original editor of The House Next Door, now a part of Slant Magazine, and the publisher of Press Play, a blog of film and TV criticism and video essays. He is the director of the 2005 romantic comedy Home.

Michael Chabon is the Pulitzer Prize-winning author of many novels, the most recent being Telegraph Avenue. He lives in Berkeley, California, with his wife and four children.

Max Dalton is a graphic artist living in Buenos Aires, Argentina, by way of Barcelona, New York, and Paris. He has published a few books and illustrated some others, including The Wes Anderson Collection: The Grand Budapest Hotel (Abrams, 2015). Max started painting in 1977, and since 2008, he has been creating posters about music, movies, and pop culture, quickly becoming one of the top names in the industry.

“Your coffee table wants—no, scratch that—needs this book . . . Packed with 400 images of everything from behind-the-scenes set shots to makeup inspiration to hand-drawn storyboards, the massive tome is pure eye candy. But in addition to the visuals, Seitz also dives deep into each and every Anderson film.” (NYLON)

“Each page of this book—filled with conversations, photographs and artwork surrounding each film—showcases Anderson’s pop-culture inspirations from Hitchcock and Star Wars to Jacques Cousteau and the French New Wave. Better than most of their kind, the talks reveal a candidness and honesty between critic and director, allowing Seitz to dig around Anderson’s vault and share his discoveries.” (FILTER)

“The Wes Anderson Collection comes as close as a book can to reading like a Wes Anderson film. The design is meticulously crafted, with gorgeous full-page photos and touches like a still representation of Rushmore’s opening montage.” (The A.V. Club)

“Reading the book, you feel as if you’re disappearing into the miniature world of Anderson’s movies, like you’re playing around in the files and fastidiously kept dossiers assembled for each project. In this way, the book mimics the work.” (Complex.com)

Book Description Hardback. Condition: New. Eric Anderson (illustrator). Language: English. Brand new Book. Wes Anderson is the most influential comedic voice from the past two decades of American cinema. A true auteur, his intimate involvement in each of his films; Bottle Rocket, Rushmore, The Royal Tenenbaums, The Life Aquatic with Steve Zissou, The Darjeeling Limited, Fantastic Mr. Fox and Moonrise Kingdom, includes scriptwriting, set design, soundtrack selections and unit photography. Anderson's visual artistry, inimitable tone and idiosyncratic characterisations make each of his films instantly recognisable as "Andersonian."The Wes Anderson Collection is the first in-depth overview of Anderson's work, guiding readers through the life and career of one of the most talked-about contemporary filmmakers. Previously unpublished photos, artwork and ephemera complement a book-length interview between Anderson and award-winning film critic Matt Zoller Seitz, who offers insights into Anderson's creative process, influences, and the production of his films. These elements come together in a meticulously designed object in the spirit of Anderson's movies: melancholy and playful, wise and childish-and thoroughly original. Seller Inventory # AAZ9780810997417