Items related to Sea of Slaughter (The Farley Mowat Series) 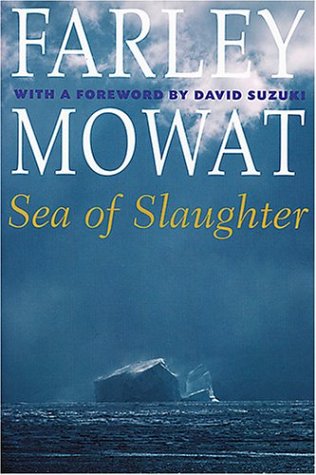 The northeastern seaboard of the United States and Canada, from Cape Cod to Labrador, was the first region in North America to suffer from human exploitation. In this timeless narrative, Farley Mowat describes in harrowing detail the devastation inflicted upon the birds, whales, fish, and mammals of this icy coast--from polar bears and otters to cod, seals, and ducks. Since its first publication some 20 years ago, this powerful work has served as both a warning to humanity and an inspiration for change.

"A hymn and a plea for life, yet also a symphony of death...a caring, compassionate, prophetic vision...as Farley Mowat shows so well, there are no more excuses."
-The Globe and Mail

"In this masterpiece, Canada's most beloved naturalist-author is as angry about the assult on the living sea as Rachel Carson was about the land in Silent Spring."
-Roger Tory Peterson

Farley Mowat, bestselling author of Never Cry Wolf, A Whale for the Killing, and The Dog Who Wouldn't Be, calls Seal of Slaughter his most important work...a book he felt compelled to write after witnessing the drastic decline in the rich diversity of wildlife along the Northeastern seaboard.

Farley Mowat does not tell of the extinction of one species. His unforgettable narrative tells of the devastation of all different types of animal life from a region where the forests once teemed with game, where the fish could be scooped up with baskets...and where the Eskimo curlew fell in clouds of thousands to sportsmen who used them for target practice before turning their guns to clay pigeons.

With his unique storytelling gift, Farley Mowat details why some creatures, such as the gentle penguin-like great auk, have vanished forever. And he astounds us with his account of the killing that continues--of wolf and whale, seal and bear, fish and fowl. Monumental in scope, chilling in its impact, Sea of Slaughter is a warning, a vision, and a powerful testament for preserving the living grandeur fast disappearing from our world.