Items related to Too Big! 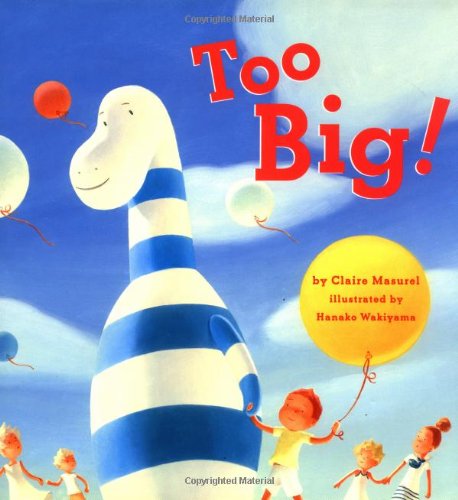 When Charlie wins at the carnival, he chooses the biggest prize of all-a big, blue and white dinosaur. But soon Charlie finds that Big Tex is too big to go to the park, and he must take Bunny instead. Big Tex is also too big to go to the store, so Charlie takes Teddy. It seems Big Tex is too big to go anywhere! That is, until Charlie gets sick and must go to the doctor, and all his other toy animals are small enough to hide. Then, it is Big Tex who is just the right size. Claire Masurel’s sweet story and Hanako Wakiyama’s charming illustrations will appeal to any child who’s ever felt too small.

Claire Masurel was born in France and now lives in New York City. She is the author of more than fifteen books for children.

Hanako Wakiyama is a freelance illustrator who lives in Northern California. This is her second children s book.

Reviews of
Too Big!
By Claire Masurel
Illustrated by Hanako Wakiyama

FROM:
Wakiyama's fresh, distinctive artwork and Masurel's understated story infuse this toy tale with quiet originality. What's "too big" is a boy's blue-and-white striped dinosaur named Tex. While the smaller toys get to accompany the boy everywhere, "Tex never went to the beach. He never went to a baseball game. He never went anywhere. Poor Tex!" The illustration shows the dinosaur gazing woefully out the window, holding the curtain aside. But when it's time to go to the doctor, the other toys hide; only loyal Tex is ready and waiting with his mild smile and a red hat and scarf. Wakiyama's atmospheric oil paintings feature characters with a smooth, rounded quality reminiscent of William Joyce's inventions, but with a palette of soft blues, yellows and reds that lend the figures a weightless quality (Tex appears to be inflated). The artist's use of unexpected perspectives is all her own; for instance, a pair of before-and-after porthole-shaped paintings shows the boy delivering the pitch that wins him Tex as a prize, with the ball and cans (once stacked as a pyramid) breaking the circular frame. The delightfully peculiar artwork seems so right that it feels already familiar, like an heirloom teddy bear; the light, whimsical style fits the fantasy of animated toys especially well. Just like Tex, kids will want to take this winner of a book everywhere..

FROM: SCHOOL LIBRARY JOURNAL
By Tom S. Hurlburt
Wakiyama's illustrations, rendered in oil, lend a quite but glowing atmosphere to this simple and thoroughly enjoyable story. Yountsters will feel for Big Tex when he's left out of the various family trips and will delight in the drawing on the final page, which shows him towering over the other(s). A surefire hit, whether read to individual children or to a group.