Items related to Dictionary of the Ancient Near East 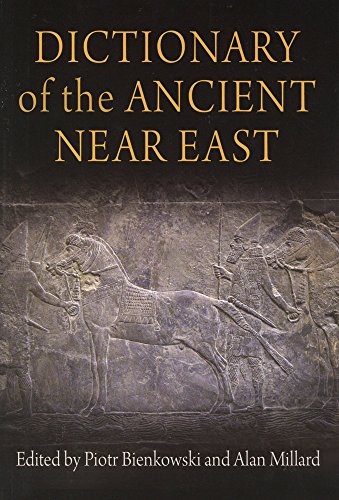 Selected by Choice magazine in 2000 as an Outstanding Academic Book

The earliest farms, cities, governments, legal codes, and alphabets developed in the ancient Near East. Four major religions—Judaism, Zoroastrianism, Christianity, and Islam—began in the region. Ideas, inventions, and institutions spread to all parts of the globe from the urban centers of the ancient Egyptians, Syrians, Hittites, Assyrians, Babylonians, and other peoples of the biblical world. For good reason is the ancient Near East known as the cradle of civilization.

The only single-volume dictionary to embrace the whole of the ancient Near East, this major reference work covers Anatolia, Mesopotamia, the Levant, and the Arabian peninsula from the earliest times, through the Old Testament period, until the fall of Babylon to the Persians in 539 B.C. From "Achaemenids" to "Ziwiye," "administration" to "ziggurat," in 500 concise, cross-referenced, and comprehensively indexed entries, the Dictionary of the Ancient Near East describes and explains the major ideas, institutions, places, peoples, and personalities that shaped the earliest development of Western civilization.

Architecture, literature, economics, labor, religion, and society are all extensively treated, as are such subjects as crime, dreams, drunkenness, shipwrecks, and sexual behavior (and misbehavior). Each entry, written by a scholar of international standing, includes up-to-date bibliographic references. The book is richly illustrated with photographs, maps, and plans of major sites.

Piotr Bienkowski is Professor in the School of Arts, Histories and Cultures at the University of Manchester. He was editor of the archaeological journal Levant from 1987 to 1992 and has directed archaeological projects in Jordan. He is the author or editor of many publications on the archaeology and culture of the ancient Near East and Egypt, including Jericho in the Late Bronze Age, Early Edom and Moab: The Beginning of the Iron Age in Southern Jordan, and Treasures from an Ancient Land: The Art of Jordan. Alan Millard is Rankin Professor Emeritus of Hebrew and Ancient Semitic Languages at the University of Liverpool. He has participated in archaeological projects over much of the Near East; among his scholarly and popular works on the subject are The Eponyms of the Assyrian Empire, 910-612 B.C., Treasures from Bible Times, and Discoveries from the Time of Jesus.

The preface says that the purpose of this book, first published by the British Museum, is "to provide a handy one-volume reference work accessible to anyone with an interest in the ancient Near East, as well as students and specialists in different areas who require a wider view." The editors have done what they set out to do. The time period covered is from the Lower Paleolithic (around 1.5 million years ago) to the fall of Babylon to Cyrus the Great in 539 B.C. The geographic scope encompasses Mesopotamia, Iran, Anatolia, the Caucasus, the Levant, and Arabia. There are some entries on major archaeologists and explorers from modern times as well as on ancient cultures, historic and legendary figures, concepts, aspects of daily life, and individual archaeological sites.The 500 articles range from brief paragraphs to a few columns on double-columned pages, and almost all have short bibliographies, generally citing academic studies, not all of which are in English. There are many articles covering general themes like family, women, writing, and royal courts. Within articles, topics covered separately are identified with an asterisk at the first mention. There is an index for main topics and topics covered in several entries as well as for captions to illustrations. The illustrations are generally photographs of artifacts or simplified line drawings of archaeological sites or maps. The print is extremely small.The book's price makes it suitable for most academic and medium-sized to large public libraries that need a one-volume survey of the ancient Near East. REVWR
Copyright © American Library Association. All rights reserved