Items related to The Digest of Justinian (4 Volume Set) (English and...

The Digest of Justinian (4 Volume Set) (English and Latin Edition)

The Digest of Justinian (4 Volume Set) (English and Latin Edition) 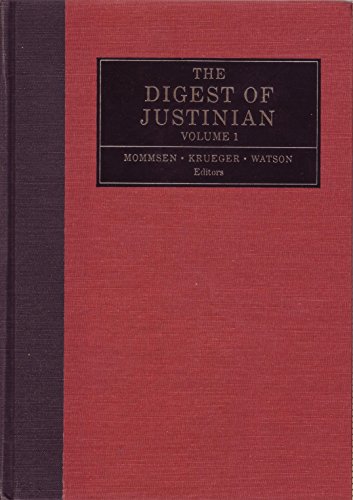 The most famous and influential collection of legal materials in world history, available in a four-volume English-Latin hardcover edition.

When Justinian became sole ruler of the Byzantine Empire in A.D. 527, he ordered the preparation of three compilations of Roman law that together formed the Corpus Juris Civilis. These works have become known individually as the Code, which collected the legal pronouncements of the Roman emperors, the Institutes, an elementary student's textbook, and the Digest, by far the largest and most highly prized of the three compilations. The Digest was assembled by a team of sixteen academic lawyers commissioned by Justinian in 533 to cull everything of value from earlier Roman law. It was for centuries the focal point of legal education in the West and remains today an inexhaustible treasure of legal rules and reasoning.

Commissioned by the Commonwealth Fund in 1978, Alan Watson gathered a team of thirty specialists to produce this magisterial translation, which is printed here with Theodor Mommsen's authoritative Latin text of 1878 on facing pages.

Alan Watson is Earnest P. Rogers Professor of Law, University of Georgia. He is the author of many books of legal history, including Rome of the Twelve Tables; Roman Slave Law; and Sources of Law, Legal Change, and Ambiguity, published by the University of Pennsylvania Press.