Items related to Ash Ock: Book Two of the Paratwa Saga (The Paratwa... 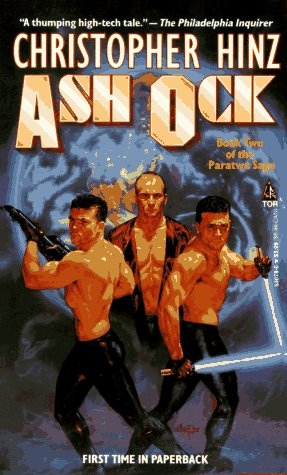 Struggling against a band of genetically engineered assassins who were partially responsible for destroying all life on Earth, the residents of several orbiting Earth colonies fear that their days are numbered. Reprint.

This second book of the Paratwa Saga (a trilogy is planned) maintains the stylish writing and plotting of Hinz's Leige-Killer , which first introduced the Paratwa--genetically enhanced, telepathically connected pairs of trained killers--and Gillian and Nick, hunters who stalk the Paratwa in the satellite colonies orbiting a demolished Earth. The scattered hints of a future conflict present in the first book are developed here, with the addition of several new threads, most of which await resolution in the third volume. Here the colonists learn that the generation starships which fled the devastated Earth have been commandeered by the Ash Ock, five pairs of Paratwa leaders who are attempting to dominate humanity. Evidence of fresh Paratwa massacres prompts the waking of Nick and Gillian from 56 years of scientifically controlled slumber. Deadly seductresses, unstable ingenues and scheming scientists populate the fanciful adventures that ensue.
Copyright 1989 Reed Business Information, Inc.

Outbreaks of terrorist violence, dissension among the members of the Council of Irrya, and destruction of vital computerized data herald the imminent invasion of the deadly Paratwa--telepathically linked pairs of killers bent on the conquest of the galaxy. Although this sequel to Liege-Killer (LJ 3/15/87) exhibits the same compelling quality of its predecessor, its place in mid-trilogy necessitates an unresolved conclusion. Recommended for most libraries.
Copyright 1989 Reed Business Information, Inc.