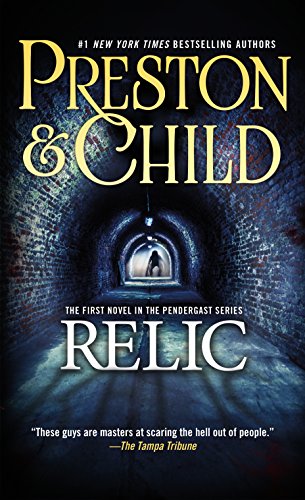 Relic: The #1 New York Times bestselling thriller by Douglas Preston's and Lincoln Child, with more than one million copies sold to date

Just days before a massive exhibition opens at the popular New York Museum of Natural History, visitors are being savagely murdered in the museum's dark hallways and secret rooms. Autopsies indicate that the killer cannot be human...

But the museum's directors plan to go ahead with a big bash to celebrate the new exhibition, in spite of the murders.

Museum researcher Margo Green must find out who--or what--is doing the killing. But can she do it in time to stop the massacre?

A series of bizarre and brutal murders is taking place in the halls of the New York Museum of Natural History, only days before a massive exhibition is set to open. Margo Green knows that the killer is something not human, something that's not even supposed to exist. Where did it come from, how did it get into the museum, and how can it be stopped?

Book Description Paperback. Condition: New. Reissue. Language: English. Brand new Book. When a team of archaeologists is savagely massacred in the Amazon Basin, all that survives are several boxes of relics and plant specimens. When the relics finally find their way to a museum in New York there are strange repercussions. Seller Inventory # ABZ9780812543261