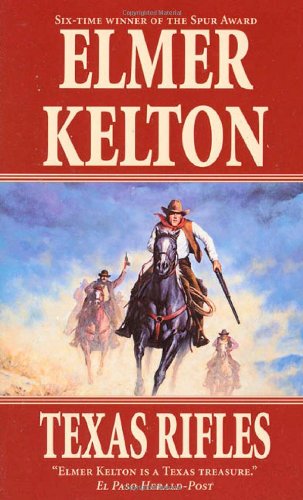 The new Confederacy, facing into the Union cannon, had too much on its hands to send troops to the Texas frontier to hold back the Indians. Instead, it authorized the State of Texas to raise its own troops.

Many kinds of men drifted into the Texas Mounted Rifles. Some thought it might be safer than fighting in far off Virginia. Many were merely young men a-thirst for adventure. Some were settlers who saw this as the best way to protect their families and homes against the murderous thrusts of the Comanche. And some were men who still loved the Union, who had lived too long under that gallant flag to turn their guns against it now. Such a man was Scout Sam Houston Cloud...

Elmer Kelton (1926-2009) was the award-winning author of more than forty novels, including The Time It Never Rained, Other Men’s Horses, Texas Standoff and Hard Trail to Follow. He grew up on a ranch near Crane, Texas, and earned a journalism degree from the University of Texas. His first novel, Hot Iron, was published in 1956. Among his awards have been seven Spurs from Western Writers of America and four Western Heritage awards from the National Cowboy Hall of Fame. His novel The Good Old Boys was made into a television film starring Tommy Lee Jones. In addition to his novels, Kelton worked as an agricultural journalist for 42 years, and served in the infantry in World War II. He died in 2009.