Items related to City of Bones 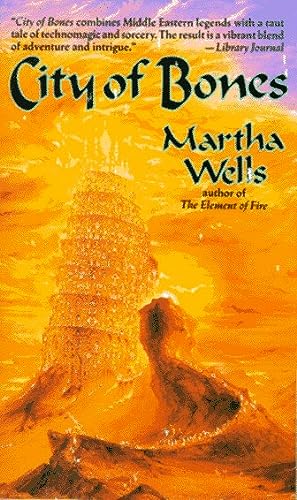 A beautiful woman and a handsome thief must unravel the mysteries of an age-old technology to stop a fanatical cult from unleashing an evil that threatens to destroy all the water in the world. Reprint.

Martha Wells is the author of seven fantasy novels, including Wheel of the Infinite, City of Bones, The Element of Fire, and the Nebula-nominated The Death of the Necromancer. Her most recent novels are a fantasy trilogy: The Wizard Hunters, The Ships of Air, and The Gate of Gods, all currently out in paperback from HarperCollins Eos. She has had short stories in the magazines Black Gate, Realms of Fantasy, Lone Star Stories, and Stargate Magazine, and in the Tsunami Relief anthology Elemental and The Year’s Best Fantasy #7. She has essays in the nonfiction anthologies Farscape Forever and Mapping the World of Harry Potter from BenBella Books. She has also written two media-tie-in novels, Stargate Atlantis: Reliquary and Stargate Atlantis: Entanglement. Her books have been published in eight languages, including French, Spanish, German, Russian, and Dutch, and her web site is www.marthawells.com.

Wells's second novel (after The Element of Fire) is a delight: an SF adventure with complex characters, archeological puzzles, a dash of mental magic and a lot of fast-paced action. Khat and his partner, Sagai, make their living finding relics that survived the destruction of the Ancients and selling them to the highest bidders. Khat is a Krisman (a bioengineered human whose race was designed for the grueling desert environment most of his world has become), which places him even lower on the social scale than his foreign-born partner. The two are coerced into working with the Patrician Warder, Elen, who is searching out a specific relic for her mentor, the Master Warder. Warders have certain mental powers, although overusing these powers can cause them to go mad. The Master Warder believes that this particular relic will enhance his powers without causing insanity, but Khat and Elen discover that there is a terrible price to be paid for using the artifact, one that may bring about the final destruction of their already ailing planet. This finely crafted novel expertly combines several genres?SF, fantasy, horror?and, perhaps most impressive of all, even manages to avoid an overly sentimental ending.
Copyright 1995 Reed Business Information, Inc.