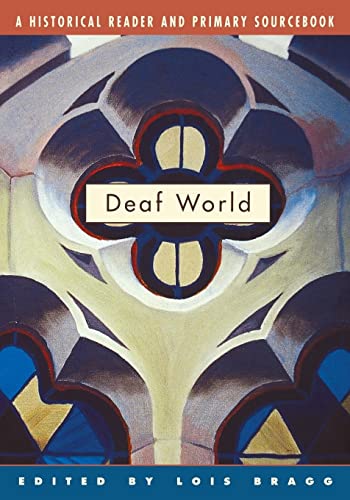 To many who hear, the deaf world is as foreign as a country never visited.
Deaf World thus concerns itself less with the perspectives of the hearing and more with what Deaf people themselves think and do. Editor Lois Bragg asserts that English is for many signing people a second, infrequently used language and that Deaf culture is the socially transmitted pattern of behavior, values, beliefs, and expression of those who use American Sign Language. She has assembled an astonishing array of historical sources, political writings, and personal memoirs, from classic 19th-century manifestos to contemporary policy papers, on everything from eugenics to speech and lipreading, the right to work and marry, and the never-ending controversy over separation vs. social integration. At the heart of many of the selections lies the belief that Deaf Americans have long constituted an internal colony of sorts in the United States.
While not attempting to speak for Deaf people en masse, this ambitious platform anthology places the Deaf on center stage, offering them an opportunity to represent the world--theirs as well as the hearing world--from a Deaf perspective. For Deaf readers, the book will be welcomed as a gift, both a companion to be savored and, as often, an opponent to be engaged and debated. And for the hearing, it serves as an unprecedented guide to a world and a culture so often overlooked.
Comprising a judicious mix of published pieces and original essays solicited specifically for this volume, Deaf World marks a major contribution.

Lois Bragg is Professor of English at Gallaudet University.

Editor Bragg collects essays, speeches, articles, and short stories to provide an "authentic self-portrait of the American deaf community." The book's first section examines early social expressions about deafness: assumptions that it was associated with lack of intelligence, debates about genetics and intermarriage among deaf people, controversies about whether and how to educate the deaf. The collection proceeds with sections on American sign language, deaf education, deaf ethics, and the deaf community. Among the authors are advocates such as Edward Miner Gallaudet, founder of the university bearing his name, deaf playwright Shanny Mow, and a deaf silent film consultant; the latter two are among those who comment on changes in the images and employment of the deaf in the entertainment world and the role of nonverbal communication. Several writers explore such special problems as those of deafness among blacks, the struggle against racism, and bias against the disabled. Together they attest to growing assertiveness and even militancy in activism for the rights of the deaf. Vanessa Bush
Copyright © American Library Association. All rights reserved