Items related to The Responsibility to Protect: Ending Mass Atrocity...

Evans, Gareth The Responsibility to Protect: Ending Mass Atrocity Crimes Once and For All

The Responsibility to Protect: Ending Mass Atrocity Crimes Once and For All 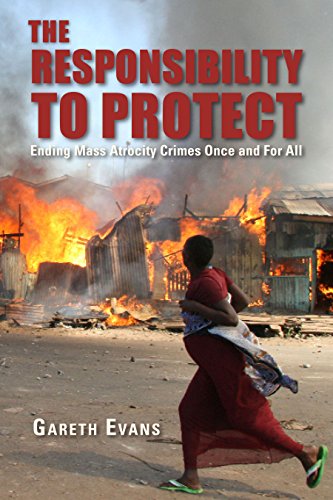 "Never again!" the world has vowed time and again since the Holocaust. Yet genocide, ethnic cleansing, and other mass atrocity crimes continue to shock our consciences —from the killing fields of Cambodia to the machetes of Rwanda to the agony of Darfur.

Gareth Evans has grappled with these issues firsthand. As Australian foreign minister, he was a key broker of the United Nations peace plan for Cambodia. As president of the International Crisis Group, he now works on the prevention and resolution of scores of conflicts and crises worldwide. The primary architect of and leading authority on the Responsibility to Protect ("R2P"), he shows here how this new international norm can once and for all prevent a return to the killing fields.

The Responsibility to Protect captures a simple and powerful idea. The primary responsibility for protecting its own people from mass atrocity crimes lies with the state itself. State sovereignty implies responsibility, not a license to kill. But when a state is unwilling or unable to halt or avert such crimes, the wider international community then has a collective responsibility to take whatever action is necessary. R2P emphasizes preventive action above all. That includes assistance for states struggling to contain potential crises and for effective rebuilding after a crisis or conflict to tackle its underlying causes. R2P's primary tools are persuasion and support, not military or other coercion. But sometimes it is right to fight: faced with another Rwanda, the world cannot just stand by.

R2P was unanimously adopted by the UN General Assembly at the 2005 World Summit. But many misunderstandings persist about its scope and limits. And much remains to be done to solidify political support and to build institutional capacity. Evans shows, compellingly, how big a break R2P represents from the past, and how, with its acceptance in principle and effective application in practice, the promise of "Never again!" can at last become a reality.

Gareth Evans has been president and CEO of the International Crisis Group since 2000 and was foreign minister of Australia from 1988 to1996. Co-chair of the International Commission on Intervention and State Sovereignty (2000–01), which initiated the Responsibility to Protect concept, he has since led the movement for its worldwide adoption and application. Evans has served on many other global bodies including the UN Secretary-General's High-Level Panel on Threats, Challenges, and Change (2003–04) and the UN Secretary-General's Advisory Committee on the Prevention of Genocide and Mass Atrocities (2006–present), and was named in 2008 to co-chair the International Commission on Nuclear Non-Proliferation and Disarmament. His numerous publications include eight other books and a prizewinning Foreign Policy article on cooperative security. Mail & Guardian (South Africa)

"Evans cuts a fascinating figure on the world stage. Always informed, sometimes alarming, never dull, he has a diplomat's ability to listen and reflect, and a politician's will to dominate a room. He is also an able and prolific writer." Scott Malcomson, New York Times Book Review

"Much of the book is an elaboration of the tools and strategies that are available to intervening states before, during, and after crises break out. The debate on when and how the world should act in humanitarian crises will continue-and this inspired manifesto will be its essential guidebook." G. John Ikenberry, Foreign Affairs

"An account of the emergence of a new international norm--the responsibility to protect--by the person who has done more to develop it than any." Allan Gyngell, International Studies

"No one is better suited than Gareth Evans to describe this revolution of opinion and trace its consequences." Douglas Hurd, Survival

"The Responsibility to Protect is the most important and imaginative doctrine to emerge on the international scene for decades. No one is better placed than Gareth Evans to lead the debate about its scope and application to contemporary crises, such as Darfur, Myanmar, and Zimbabwe. And no one could have done it better than in this comprehensive and sophisticated book." Louise Arbour, UN High Commissioner for Human Rights, 2004–08, and chief prosecutor, Former Yugoslavia and Rwanda Tribunals, 1996–99

"We have been shamed so often by our failure to protect the victims of mass atrocity crimes. Gareth Evans's book is a passionate, lucidly argued, and immensely well-informed guide to how the world can do better." Desmond Tutu, Archbishop Emeritus of Cape Town

"A tour de force.... Gareth Evans, more than anyone, has persuaded leaders to accept their responsibility to protect the vulnerable, and convinced us that we can no longer be passive bystanders." Jan Egeland, UN Emergency Relief Coordinator, 2003–06

"Gareth Evans, one of the principal creators of the Responsibility to Protect, has written the first major work on this noble, important, and elusive concept. Anyone interested in international affairs should read this book on what is certain to be a continuing debate." Ambassador Richard Holbrooke, U.S. Permanent Representative to the United Nations,1999–2001

"We can no longer ignore atrocities beamed into our living rooms. Our conscience demands that we react whenever people suffer, from Rwanda to Srebrenica, from Darfur to Gaza. This volume could not be more timely or relevant." Kishore Mahbubani, Dean, Lee Kuan Yew School of Public Policy, Singapore, and author of The New Asian Hemisphere

"I strongly endorse Gareth Evans's eloquent argument. This call to prevent terrible crimes against humanity like those I witnessed in Rwanda is one we must answer." General Romeo Dallaire, author of Shake Hands with the Devil: The Failure of Humanity in Rwanda

1. The Responsibility to Protect: Ending Mass Atrocity Crimes Once and For All

2. The Responsibility to Protect: Ending Mass Atrocity Crimes Once and For All [Hardcover] Evans, Gareth

3. The Responsibility to Protect: Ending Mass Atrocity Crimes Once and For All