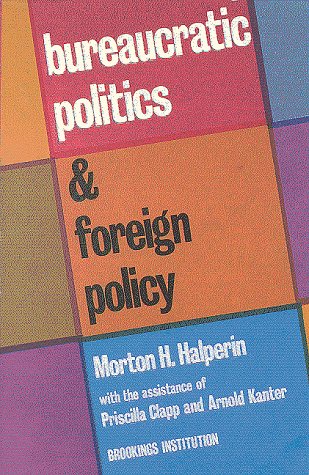 The first edition of Bureaucratic Politics and Foreign Policy is one of the most successful Brookings titles of all time. Government agencies, departments, and individuals all have certain interests to preserve and promote. Those priorities, and the conflicts they sometimes spark, heavily influence the formulation and implementation of foreign policy. A decision that looks like an orchestrated attempt to influence another country may in fact represent a shaky compromise between rival elements within the U.S. government. The authors provide numerous examples of bureaucratic maneuvering and reveal how they have influenced our international relations.

Morton H. Halperin is a senior fellow at the Center for American Progress and director of U.S. advocacy for the Open Society Institute. He served in the federal government in the Clinton, Nixon, and Johnson administrations, most recently from December 1998 to January 2001 as director of the Policy Planning Staff at the Department of State. Priscilla Clapp served nearly thirty years in government under six presidents, mostly in the State Department and overseas. Arnold Kanter is a principal and founding member of the Scowcroft Group. He has served in several capacities in government, including Special Assistant to the President and Under Secretary of State.

Book Description Brookings Institution Press, 1974. Condition: Good. Shows some signs of wear, and may have some markings on the inside. Seller Inventory # GRP8257771

Book Description Brookings Institution Press, 1974. Condition: Good. Ships from Reno, NV. Shows some signs of wear, and may have some markings on the inside. Seller Inventory # GRP113747218

Book Description Brookings Institution Press. Paperback. Condition: Fair. A readable copy. All pages are intact, and the cover is intact. Pages can include considerable notes-in pen or highlighter-but the notes cannot obscure the text. At ThriftBooks, our motto is: Read More, Spend Less. Seller Inventory # G0815734077I5N00

Book Description Brookings Institution Press. Paperback. Condition: Good. A copy that has been read, but remains in clean condition. All pages are intact, and the cover is intact. The spine may show signs of wear. Pages can include limited notes and highlighting, and the copy can include previous owner inscriptions. At ThriftBooks, our motto is: Read More, Spend Less. Seller Inventory # G0815734077I3N00

Book Description Brookings Institution Press, 1974. Condition: Good. A+ Customer service! Satisfaction Guaranteed! Book is in Used-Good condition. Pages and cover are clean and intact. Used items may not include supplementary materials such as CDs or access codes. May show signs of minor shelf wear and contain limited notes and highlighting. Seller Inventory # 0815734077-2-4