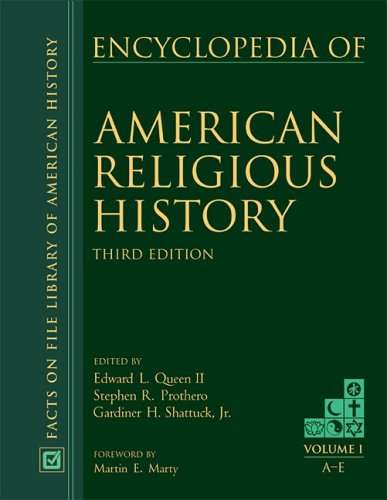 Stephen Prothero is a professor of religion at Boston University. He is the author of "The White Buddhist "and "Purified by Fire: Cremation in American Culture," He has written for "Salon "and other publications.

With more than 800 alphabetically arranged entries, this revision of the 1996 edition gives students and general readers an excellent source of information on American religious history. Individual religions, denominations, religious theory and doctrine, religious movements, major personalities, and geographical regions are covered. Entry topics include African-American religion, Church of God, Hinduism, Identity movement, New France, Scottish Common Sense Realism, and Washington, Booker T. The set includes a 36-page general index as well as a "Synoptic Index," which lists related articles under broad categories such as "Feminism" or "New Religious Movements." The entries, which range from one paragraph to more than four pages and are written by scholars of religious studies, offer cross-references and bibliographies (now including Web sites). Many entries are complemented by black-and-white photographs.

This source offers a unique and convenient ready reference compared to other reference publications in the field. The Encyclopedia of the American Religious Experience (Scribner, 1988) consists of topical essays rather than short, focused entries. The Encyclopedia of American Religions (6th ed., Gale, 1999) doesn't include biographical information. The currency of The Encyclopedia of American Religious History is also an advantage. Many entries covering the period since the original 1996 publication have been added. New entries include Heaven's Gate, Hsi Lai Temple, and Waco. An effort has been made to expand coverage of religious pluralism. According to the publishers, 30 percent of the material is new or revised.

The Encyclopedia of American Religious History is an excellent and readable resource for the study of the history of religion in the U.S. The coverage is extensive and reliable, and the indexes and cross-references allow for easy access. Recommended for public and academic libraries, especially where the first edition has been heavily used. RBB
Copyright © American Library Association. All rights reserved