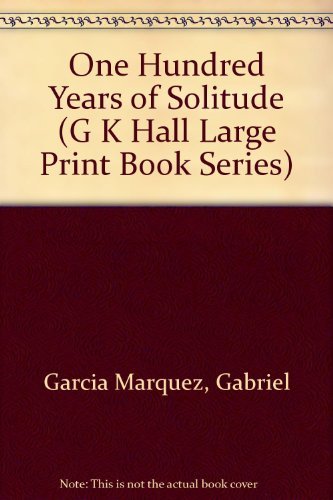 A best seller and critical success in Latin America, Europe, and the United States, One Hundred Years of Solitude tells the story of the rise and fall, birth and death of teh mythical town of Macondo through the history of the Buendia family. It is a rich and billiant chronicle of life and death and the tragicomedy of man. In the noble, ridiculous, beautiful, and tawdry story of the Buendia family one sees all mankind, just as in the history, myths, growth, and decay of Macondo one sees all of Latin America.

Love and lust, war and revolution, reiches and poverty, youth and senility--the variety of life, the endlessness fo death, the search for peace and truth--these, the universal themes, dominate the novel. Whether he is describing an affair of passion or the voracity of capitalism and the corruption of government, Garcia Marquez always writes with the simplicity, ease, and purity that are the mark fo a master. Inventive, amusing, magnetic, sad, alive with unforgettale men and women, and with a truth and understanding that strike the soul, One Hundred Years of Solitude is a masterpiece of the art of fiction.

One Hundred Years of Solitude tells the story of the rise and fall, birth and death of the mythical town of Macondo through the history of the Buendía family. Inventive, amusing, magnetic, sad, and alive with unforgettable men and women -- brimming with truth, compassion, and a lyrical magic that strikes the soul -- this novel is a masterpiece in the art of fiction.