Items related to Mighty by Sacrifice: The Destruction of an American...

Mighty by Sacrifice: The Destruction of an American Bomber Squadron, August 29, 1944 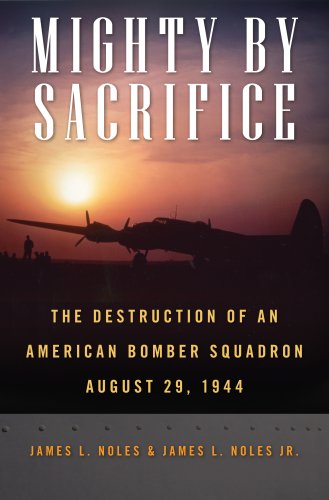 The high cost of the Allied air offensive during World War II.

On August 29, 1944, the 15th U.S. Army Air Force unleashed 500 bombers against oil and rail targets throughout central Europe. It dispatched the 20th Squadron of the 2nd Bombardment Group on what they regarded as an easy assignment: attack the Privoser Oil Refinery and associated railroad yards at Moravska Ostrava, Czechoslovakia. This "milk run" deteriorated into the bloodiest day in the 2nd Bombardment Group's history: not a single one of the 20th Squadron's B-17 Flying Fortress bombers returned from the mission. Forty airmen were killed, another 46 spent the rest of the war as POWs, and only four, with the aid of the OSS and anti-German partisans, and sympathetic Czech civilians managed to evade capture.

The ninety airmen on the mission to Moravska Ostrava provide a remarkable personal window into the Allies' Combined Bomber Offensive at its height during WWII. In a microcosm, their stories encapsulate how the U.S. Army Air Forces built, trained, and employed one of the mightiest war machines ever seen. Their stories also illustrate, however, the terrible cost in lives demanded by that same machine.

James L. Noles Sr. is a retired Army officer whose career culminated at the rank of brigadier general.  He now resides in Florence, Alabama. James L. Noles Jr. is an independent historian and partner with the Birmingham, AL, law firm of Balch and Bingham. He is author of several books, including Twenty-Three Minutes to Eternity: The Final Voyage of the Escort Carrier USS Liscome Bay. Follow his Twitter at www.twitter.com/mightyby.

"Mighty by Sacrifice brilliantly captures the sights, sounds, and fury of the bomber war in World War II. From the fast-paced action of pilots outmaneuvering strafing FW 190s to the adrenaline-charged stress of a tail gunner’s position, this ground-breaking book puts the reader into the lethal skies of Central Europe in the summer of 1944."—Patrick O'Donnell, author of We Were One, The Brenner Assignment and They Dared Return.

“This is a great story that deserves to be told. . . . The authors do such a wonderful job of relating the terror and speed of aerial combat.”—Stephen L. McFarland, coauthor of To Command the Sky: The Battle for Air Superiority over Germany, 1942–1944

“This book is original as it is the only one that I have seen (in over 35 years) that deals with a number of crews on a specific mission, that covers in detail prewar background on the individuals, training, combat, post shoot down, prisoner of war time, and post war experiences. It is also unique in that most of the literature in this genre is on the 8th Air Force, while this one covers the very much overlooked 15th.”—Kenneth P. Werrell, author of Blankets of Fire: U.S. Bombers over Japan during World War II

2. Mighty by Sacrifice: The Destruction of an American Bomber Squadron, August 29, 1944

3. Mighty by Sacrifice: The Destruction of an American Bomber Squadron, August 29, 1944

4. Mighty by Sacrifice: The Destruction of an American Bomber Squadron, August 29, 1944