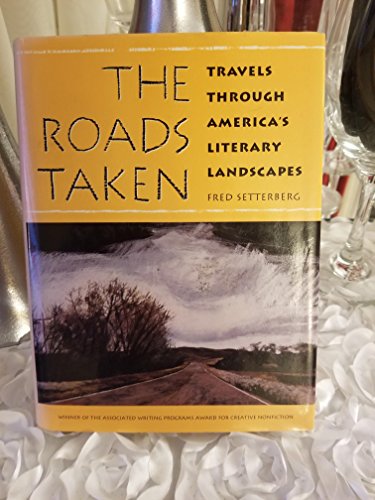 The Roads Taken is a big-hearted book, a thoughtful and wryly affectionate rendering of our national character as revealed to Fred Setterberg in his extensive readings and wanderings. At once a travelogue and memoir, a literary history and extended nature piece, The Roads Taken reconnects Americans to each other and to the land they live and work in - and often forsake. From Henry David Thoreau's Maine Woods to Jack London's San Francisco Bay, from Ernest Hemingway's Upper Peninsula to Zora Neale Hurston's French Quarter, Setterberg pilots readers across the well-traveled pages of our national literature and the well-read contours of the American landscape. He acquaints us anew with the books and ideas that, time after time, have pried us from our self-centered moorings and set us into physical and metaphysical motion. The Roads Taken begins, fittingly, with a discussion between Setterberg and his nineteen-year-old vagabond cousin, Wally, about Jack Kerouac, invoking the Beat writer's spirit as they swap stories about hitchhiking and one-night stands, Setterberg praises Kerouac as perhaps the best of our "bad influence" writers - an author whose stories make people quit their jobs and give away their possessions, whose books are among the first to be banned or burned while formulaic and forgettable best-sellers look on with impunity. Spurred on by Wally (whose next stop is Alaska), Setterberg takes to the road. In chapters inspired by and devoted to particular writers and locales, he visits Red Cloud, Nebraska, a prairie hamlet virtually unknown except as Willa Cather's hometown, and tours across Texas, a state known for all the wrong things until Larry McMurtry distilled a century ofdimestore cowboy novels into his pure and beautiful literature of loneliness. He travels to Nevada, where the budding fabulist Mark Twain honed his truth-stretching skills as a reporter for the Virginia City Territorial Enterprise, and to New Orleans, where Zora Neale Hurston immersed herself in the voodoo rituals she later alluded to in her study of black folklore, Mules and Men. Exiting the paved roads, Setterberg searches for the solace that Nick Adams, Hemingway's internally scarred World War I veteran, might have found in the forests along Lake Superior. He also trails Thoreau deep into the mountains of central Maine for just one glimpse of the adroitly evasive moose. Setterberg's meandering narrative is fertile in unexpected associations, personal memories, and historical asides; redolent with vegetation, hot coffee, and automobile exhaust; and clamorous with strains of soul and country music, laughter, and argument. In its hints at the racism and apathy in this country, and its images of our adulterated skies and waterways, the book is also disturbing. Its accumulated details only suggest the natural and cultural treasures that Setterberg fears we could lose to the "blanding" of America - the rampaging, wide-scale forces of sameness that seem intent on smoothing out our rough edges and disarming the crankiness that characterizes our country at its most local levels. Caught up in Setterberg's Whitmanesque longing to roam widely and embrace whatever comes his way, readers will skip their lunches, unplug their televisions, and let their lawns grow shaggy while they finish The Roads Taken. Then, turning to a friend, or perhaps the stranger who read the book over their shoulder on acrosstown bus ride, they will delight in passing it on.

A smart and unsentimental journey to a few forgotten or overlooked American literary landmarks; winner of the Associated Writing Programs Award for Creative Nonfiction. Setterberg's odyssey begins when his road-struck young cousin visits him in San Francisco (where the author, a freelance business writer, lives with Kerouac's sofa) and reawakens in him the sense of adventure that had inspired him to travel 20 years before. Visiting Texas with a friend, Lonnie, while collaborating on a magazine article on small towns, Setterberg discovers--instead of the heroism associated with the landscape of Larry McMurtry's Lonesome Dove--an urban and polluted world. In Nebraska with another friend, Ann, the author encounters the dual works of innocence and evil, of Willa Cather and serial-killer Charles Starkweather. Setterberg considers the corruption of journalism and of travel writing when he meets yet another old pal in Virginia City, the Nevada boomtown where Mark Twain, the artist of fraudulent journalism, got his start. In New Orleans, Setterberg meditates on Zora Neale Thurston, as well as on racism, music, and dance. Moving north, he explores with Ann the upper peninsula of Michigan--the world of Hemingway's ``Big Two-Hearted River''--and searches for a moose in the backwoods of Maine, walking in Thoreau's footsteps, each step offering a different ``gift'' to his imagination. The final chapter, poignant and surprising, describes a ferry ride between Oakland and San Francisco, taken with Setterberg's father. The two discuss Jack London, an author who brings them together with his celebration of ``strong hands and rough wits.'' There is much art here, and much sense, but mostly genial, articulate, and discerning guidance to some obscure places in America and in the mind. -- Copyright ©1993, Kirkus Associates, LP. All rights reserved.