Items related to Half Past Autumn: A Retrospective

Parks, Gordon Half Past Autumn: A Retrospective

Half Past Autumn: A Retrospective 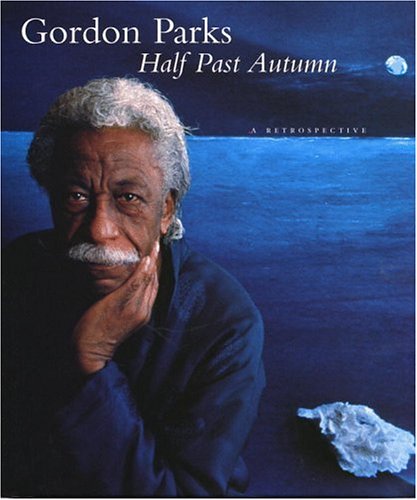 Gordon Parks is one of the 20th century's greatest multitalented cultural treasures: a writer, poet, musician, composer, filmmaker, and photographer. In this book--the companion volume to a traveling retrospective--the full flower of Parks's genius is both awe-inspiring in its depth and thorough in its demolition of the era's social-science fictions about African American potential.

Born in Kansas, Parks wandered as a homeless teen, and through wit, smarts, and improvisation--and no experience--landed a job as a photographer for the Farm Security Administration, then with his new skill took pictures for Life magazine. "Tyrants, dictators, dethroned kings," he writes, "all stared into my camera with eyes that were unveiled. The camera revealed them as they were--human beings imprisoned inside themselves." Highlights among his photographic work include the haunting shot of domestic Ella Watson, the starkness of a 1940s teenaged gang leader named Red Jackson lying eternally young in his coffin, and the elegant, life-and-death ballet of the Spanish bullfight. Parks's depiction of Duke Ellington's towering music in motion reflects the importance of jazz and blues in Parks's artistry. From the films Shaft and The Learning Tree (the latter adapted from his own novel) to his impressionistic ballet honoring Martin Luther King Jr., his work swings with an American rhythm that continues to inspire him. "A musical theme vibrates in my sleep," he writes. "I get up, go to the piano, and jot it down. A blustery sky, a crescent moon, or the blazing sun can hurry me to poetry, or to the camera. When the doors of promise open, the trick is to quickly walk through them." --Eugene Holley Jr.

Gordon Parks, at age 84, is truly a living legend - one of the early Life photographers, and among the most esteemed photographers of our time. His career also extends well beyond the camera - he is an acclaimed poet, filmmaker and composer, and author of many books, from The Learning Tree (1963) to Voices in the Mirror (1990), Arias in Silence (1994), and Glimpses Toward Infinity (1996).

1. Half Past Autumn: A Retrospective

2. Half Past Autumn: A Retrospective Parks, Gordon

3. Half Past Autumn: A Retrospective