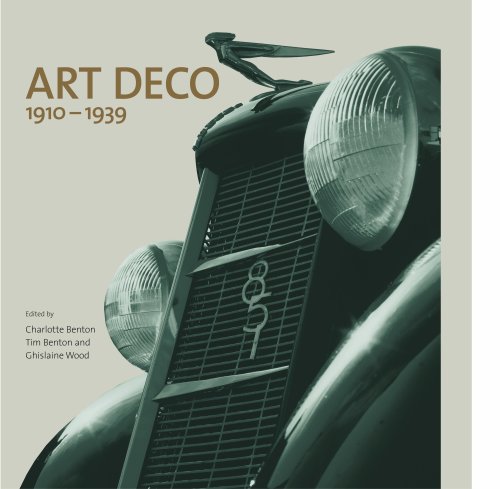 This lavishly illustrated book brings together nearly 40 essays from leading experts in the field to discuss the phenomenon that was Art Deco.

Sexy, modern, and unabashedly consumer-oriented, Art Deco was a new kind of style, flourishing at a time of rapid technological change and social upheaval. Lacking the philosophical basis of other European design movements, Deco borrowed motifs from numerous sources--Japan, Africa, ancient Egyptian and Mayan cultures, avant-garde European art--simply to create novel visual effects. Art Deco 1910-1939 surveys the sources and development of the popular style with more than 400 color illustrations and 40 chapters by numerous design specialists. The authors track Deco around the globe, from Paris to the United States—-where it got its biggest boost from mass production—-to Northern and Central Europe, Latin America, Japan, India, and New Zealand. The book's broad focus encompasses industrial artifacts (the Hindenburg blimp, the Burlington Zephyr locomotive), as well as architecture, furniture, accessories, fashion, jewelry, typography and poster design. Despite the existence of other prominent artistic movements during the 1920s and '30s, the authors tend to hang the Deco label on virtually any object that portrays the effects of technology or employs color, luxury materials or artificial light in striking ways. It does seem a stretch to include Man Ray's photographs, Sonia Delaunay's textiles and the movie King Kong in the Deco pantheon. But the great strength of Art Deco 1910-1939 is that it reveals the social context of Deco, not just its pretty face. The book accompanies an exhibition (organized by the Victoria and Albert Museum in London) at the Royal Ontario Museum in Toronto through January 4, 2004; subsequent venues are San Francisco and Boston. —Cathy Curtis

Charlotte Benton is a design and architecture historian. Her works include A Different World? Emigre Architects in Britain 1926-58.
Tim Benton is Professor of Art History at the Open University and has curated a number of exhibitions and his work has been most recently included in Le Corbusier in Paris.
Ghislaine Wood is co-curator of the Art Deco 1910-1939 exhibition. She was also co-curator of the wildly successful V&A Art Nouveau exhibition that toured internationally, and a contributor to the catalogue.