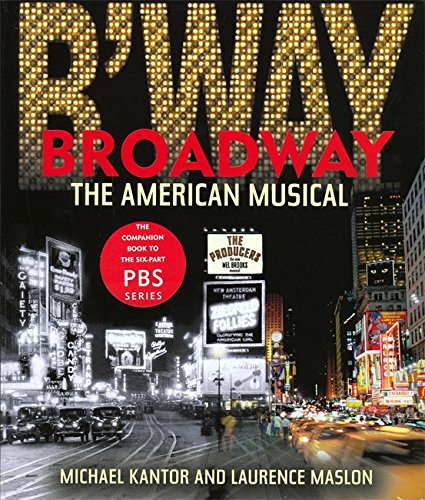 Along with jazz and abstract expressionism, the Broadway musical is one of the few uniquely American art forms. A companion to the six-part PBS documentary series, BROADWAY: THE AMERICAN MUSICAL is the first comprehensive history of the musical, from its roots at the turn of the 20th century through the smashing successes of the new millennium. The compelling, in-depth text is lavishly illustrated with a treasure trove of photographs, sheet-music covers, posters, scenic renderings, production stills, rehearsal shots, and caricatures, many previously unpublished. Complementing the narrative are lively sidebars that highlight the stars, the shows, and the songs--the key ingredients that make the musical great. Each chapter also included essays written by some of Broadway's most fascinating luminaries, past and present. An entertaining amalgam of unpublished material, candid and production photographs, and a trunkful of anecdotes and Broadway lore, BROADWAY will appeal to eighth-graders in their first high school musical as well as to connoisseurs of the art form.

If you enjoyed the PBS series Broadway: The American Musical but wanted a bit more detail and substance, try curling up with the companion book to the series. Expanded from Michael Kantor's script by Laurence Maslon, it follows the same six-part structure but its 470 pages give it more space to stretch out with the history of key musicals and the historical context behind them, or add significant trends such as revivals. What makes the book easy to pick up from the coffee table are the many subheads, the photographs (e.g., Julie Andrews in My Fair Lady) and poster art, and the sidebars and supplemental features. Occupying a page or two, the sidebars delve into such topics as original cast albums or shows that were glossed over or ignored in the series, such as Gypsy and 1776. A particularly effective use of the text is reprinting the lyrics of certain songs, examining the structure of "Soliloquy," providing historical annotations for "You're the Top," and illustrating "Broadway Baby" with pictures of Ethel Schulte on stage in Follies and 50 years earlier. Archive sections offer vintage essays from key figures (Sondheim on Kern, Hart on Rodgers), and Who's Who blurbs spotlight performers or creators (Fanny Brice, Barbara Cook, Bernadette Peters, Audra McDonald). While Broadway: The American Musical can't compete with more encyclopedic work on the subject, it's an enjoyable and worthwhile reference overall, and does provide a year-by-year list of significant shows, a selected bibliography, and maps of the theater district ca. 1928 and 2001. --David Horiuchi

Laurence Maslon teaches at NYU's Tisch School of the Arts and has written extensively on Broadway. He also wrote the American Masters biography of Richard Rogers and edited an edition of George S. Kaufman's comedies for the Library of America.

Michael Kantor is a producer of documentary films such as The West with Ken Burns, Lindbergh, Out of the Past, and Ric Burn's New York series. Prior to his work in documentary film, Mr. Kantor was a freelance theater director and writer, and has been published in Newsday, TheatreWeek, and Interview.