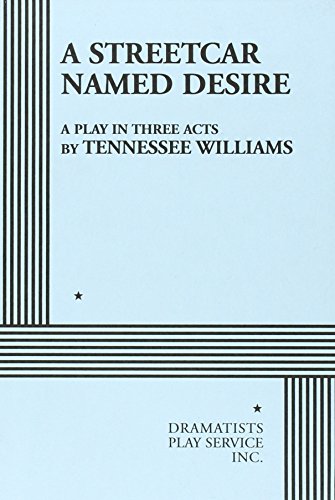 Tennessee Williams' classic drama studies the emotional disintegration of a Southern woman whose last chance for happiness is destroyed by her vindictive brother-in-law.

Tennessee Williams, born Thomas Lanier Williams in 1911 in Columbus, Mississippi won Pulitzer Prizes for his dramas, A Streetcar Named Desire and Cat on a Hot Tin Roof. Other plays include The Glass Menagerie, Summer and Smoke, The Rose Tattoo, Camino Real, Suddenly Last Summer, Sweet Bird of Youth and Night of the Iguana. He also wrote a number of one-act plays, short stories, poems and two novels, The Roman Spring of Mrs. Stone and Moishe and the Age of Reason. He died in 1983 at the age of 72.

To listen to this riveting performance, recorded live at Lincoln Center in 1973, is a revelation. It takes the listener right to the heart of what makes Tennessee Williams's 1947 Pulitzer Prize-winning play a literary icon--the words, every last word. From the lilting sounds of Blanche DuBois's fragile and flighty poetic visions to the staccato tones of Stanley Kowalski's streetwise poker games, the performances weave image after image. There are few histrionics in Rosemary Harris, James Farentino, and Patricia Conolly's naturalistic portrayals of Blanche, Stanley, and Stella. Their vocal choices make the play's final scenes sound all the more credible, and devastating. A classic performance of an American classic. B.P. Winner of AudioFile Earphones Award © AudioFile 2009, Portland, Maine

A Streetcar Named Desire: A Play in Three Acts