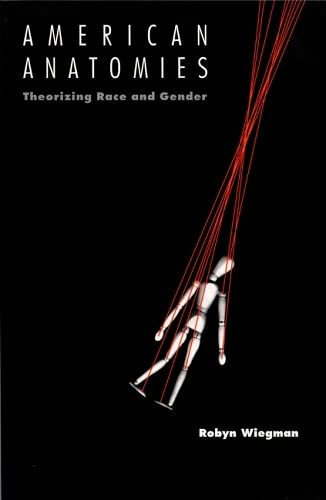 In this brilliantly combative study, Robyn Wiegman challenges contemporary clichés about race and gender, a formulation that is itself a cliché in need of questioning. As part of what she calls her "feminist disloyalty," she turns a critical, even skeptical, eye on current debates about multiculturalism and "difference" while simultaneously exposing the many ways in which white racial supremacy has been reconfigured since the institutional demise of segregation. Most of all, she examines the hypocrisy and contradictoriness of over a century of narratives that posit Anglo-Americans as heroic agents of racism’s decline. Whether assessing Uncle Tom’s Cabin, lynching, Leslie Fiedler’s racialist mapping of the American novel, the Black Power movement of the 60s, 80s buddy films, or the novels of Richard Wright and Toni Morrison, Wiegman unflinchingly confronts the paradoxes of both racism and antiracist agendas, including those advanced from a feminist perspective.
American Anatomies takes the long view: What epistemological frameworks allowed the West, from the Renaissance forward, to schematize racial and gender differences and to create social hierarchies based on these differences? How have those epistemological regimes changed—and not changed—over time? Where are we now? With painstaking care, political passion, and intellectual daring, Wiegman analyzes the biological and cultural bases of racial and gender bias in order to reinvigorate the discussion of identity politics. She concludes that, for very different reasons, identity proves to be dangerous to minority and majority alike.

"Wiegman goes well beyond current discussions in working out the theoretical challenges and cultural logics of rethinking difference within the postmodern condition, and she correctly pinpoints the overlap of race and gender within feminist theory as a decisive zone of critical articulation between postmodernism and oppositional politics."--Steven Mailloux, University of California, Irvine

Robyn Wiegman is Professor of Literature and Women's Studies at Duke University. She is author of Object Lessons, editor of Women's Studies on Its Own and AIDS and the National Body, and co-editor of The Futures of American Studies, Identity and Critical Authority, and Feminism Beside Itself.