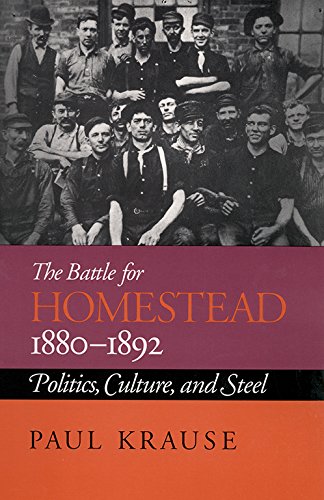 Paul Krause calls upon the methods and insights of labor history, intellectual history, anthropology, and the history of technology to situate the events of the lockout and their significance in the broad context of America’s Guilded Age.  Utilizing extensive archival material, much of it heretofore unknown, he reconstructs the social, intellectual, and political climate of the burgeoning post-Civil War steel industry.

A solid and thorough history of the Homestead Strike of 1892, in which a powerful steelworkers' union was destroyed in a lockout and protracted struggle. By taking a broad view of the strike and incorporating discussion of earlier conflicts at Andrew Carnegie's Homestead Steel Works, as well as developments in relations between capital and labor generally, Krause (History/Univ. of British Columbia) is able to produce a multifaceted, comprehensive analysis. Technological advances in steelmaking--especially the Bessemer process, which eliminated the need for certain skills in ironworking--were, he explains, part of a program by industrialists to mechanize their plants as much as possible, reducing the role of human laborers. This mechanical frame of reference--plus the emergence of ``machine politics'' as practiced by mill owners in the second half of the 19th century--brought on a ferocious battle with organized labor as workers sought to retain a livelihood that would allow them a measure of economic security. In contrast to steelworkers in Pittsburgh, who were split into divisive factions, the Amalgamated Association of Iron and Steel Workers in the nearby town of Homestead won an important victory during a strike against the forced signing of a company contract in 1882. Ten years later, though, the unity of the town and its workers could not survive an occupation by National Guard troops, recruitment of scab labor, and charges of murder and treason against strike leaders, and the union was broken, effectively ending the power of organized labor in the US steel industry for nearly 40 years. The definitive work on Homestead and its significance for American labor, with lessons still valid a century later. (Illustrations--not seen.) (Those interested in reading further about Homestead should note that the publisher is bringing out simultaneously ``The River Ran Red,'' ed. by David P. Demarest and others: an excellent collection of eyewitness accounts, newspaper reproductions, contemporary photos, etc., woven together with commentary by several scholars. Hardcover: $39.00, 0-8229-3710-7; paper: $19.95, 0-8229-5478-8.) -- Copyright ©1992, Kirkus Associates, LP. All rights reserved.