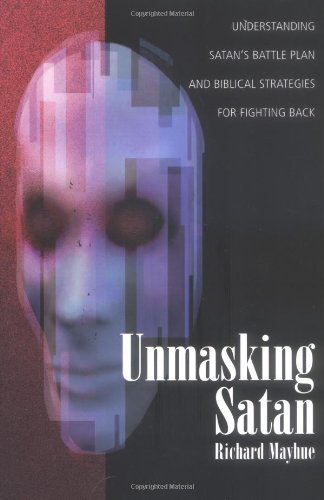 Diffusing the hype and hyperbole that many Christians hear about Satan and how he works, the author presents a popular and authoritative look at the real person of Satan—the one he doesn't want us to discover.

“Unmasking Satan is a practical study that shows you how to recognize the enemy, understand his strategy, and defeat him.”

—Warren Wiersbe
from the foreword

As C. S. Lewis revealed a generation ago in The Screwtape Letters, humans tend to either deny Satan’s existence or fear him excessively. These two faulty and potentially disastrous views have dominated human thought throughout history, putting the church in a perilous position.

Satan skillfully wages a serious and deadly covert war. His goal: to bring down every Christian and God’s kingdom with them. To win this battle against Satan, we must first see him as he really is.

Unmasking Satan rips away his disguises. Have no doubt; God knows Satan’s every scheme and has supplied us with a definitive battle plan we must implement to defeat Satan’s evil plans.

In a day when Christians and non-Christians alike decry rampant evil and subtle loss of true moral values, there may not be a more important book for us to read.

Dr. Richard Mayhue (Th.D., Grace Theological Seminary) is Senior Vice President and Dean of The Master's Seminary, Sun Valley, California, where has also teaches theology and pastoral ministry. In more than twenty-five years of ministry Dr. Mayhue has served as a pastor, trained pastors, and written, edited or contributed to more than fifteen books.

Book Description Kregel Publications,U.S., United States, 2003. Paperback. Condition: New. Language: English. Brand new Book. Unmasking Satan exposes the many tricks of the temptation trade that Satan employs to snare the unwary believer. For each of the devilish tactics our enemy can deploy there is a correspondingly powerful biblical counterattack that believers can launch. This insightful volume provides a practical--and successful--battle plan for every Christian to stand against the enemy. Seller Inventory # APC9780825433450