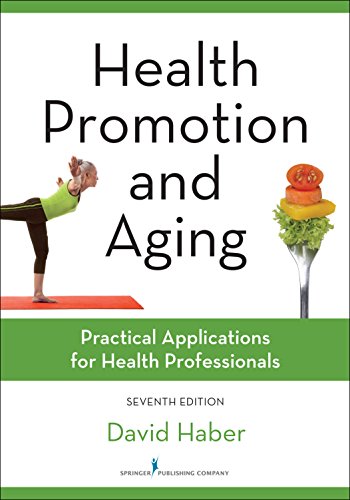 The seventh edition of this classic text champions healthy aging by demonstrating how to prevent or manage disease and make large-scale improvements toward health and wellness in the older adult population. The text synthesizes state-of-the-art research findings -- providing convincing evidence that health promotion truly works -- with practical, effective strategies. Encompassing important research results that supplant prior recommendations, this new edition provides updated best practices and strategies to ensure the active participation of older adults in all aspects of life.

Completely reorganized for ease of use, this textbook features updated demographics and rankings for leading causes of death, new blood pressure screening guidelines and data on obesity and diabetes, updated exercise regimens, older-driver statistics and innovations such as the driverless car, cautions regarding ineffective brain-training programs, and more.

Highly practical, the text includes health-promoting tools, resource lists, assessment tools, illustrations, checklists, and tables. Additionally, the book includes key terms and learning objectives at the start of each chapter, along with thought-provoking questions and reflection boxes. An Instructor's Manual and PowerPoint slides are available to facilitate teaching.

New to the Seventh Edition:

David Haber, PhD , is an assistant professor in the Gerontology Department at Western Oregon University, Monmouth, Oregon. Prior to his current affiliation he worked at several institutes of higher education.

For a decade he was the John and Janice Fisher distinguished professor of wellness and gerontology at Ball State University in Muncie, Indiana. For the decade prior to that, Dr. Haber was a professor at the University of Texas Medical Branch in Galveston. Before that he served as the director of the Center for Healthy Aging, at Creighton University’s multidisciplinary shopping mall–based geriatric center in Omaha, Nebraska.

The third edition of this book, Health Promotion and Aging, was selected for the 2004 Book of the Year Award by theAmerican Journal of Nursing in two categories: Gerontologic Nursing, and Community and Public Health. Dr. Haber also authored Health Care for an Aging Society.