Items related to Loaded Dice: The Foreign Office and Israel 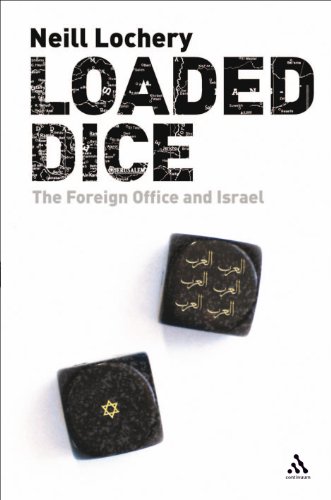 There is an accepted popular myth about recent Middle Eastern history, that ever since the days of Lawrence of Arabia the British Foreign Office has been heavily prejudiced in favor of the Arab cause in the Middle East and consistently anti-Israel. In this compact and very readable account of Middle Eastern politics since the Second World War, Neil Lochery sets out to examine the truth of this myth. Dr. Lochery focuses on the diplomatic relationship between the Foreign office and the State of Israel - one of the most fascinating untold diplomatic stories of the latter twentieth century. An Israeli official once claimed that even apartheid regimes in South Africa were treated better by the British Foreign Office. Since the creation of Israel in May 1948, some twenty one British foreign secretaries (in twelve different British governments) and have dealt with Israel with varying degrees of success. Dr. Lochery's account is dispassionate and carefully researched. The author is a gentile and no Zionist, but he has written this book because he believes that the truth must be told.

Dr. Neill Lochery holds the Catherine Lewis Lectureship in Modern Israeli Politics and is director of the Centre for Israeli Studies at University College London. A leading specialist in the politics and history of the Middle East , he has written four other books.

"Loaded Dice shows that Israel's diplomatic position depends just as much upon her ability to attract public support as on her military triumphs." Reviewed by Vernon Bogdanor in Jewish Chronicle, 2008

Book Description Condition: New. Brand New Original US Edition.We Ship to PO BOX Address also. EXPEDITED shipping option also available for faster delivery.This item may ship fro the US or other locations in India depending on your location and availability. Seller Inventory # AUDECC-6914

Shipping: US$ 37.00
From United Kingdom to U.S.A.
Destination, rates & speeds