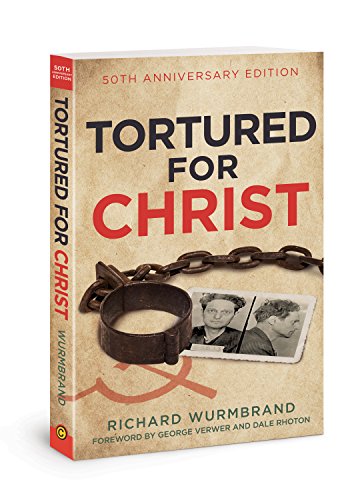 Richard Wurmbrand suffered 14 years in underground prison cells, months in solitary confinement, and years of physical torture. His only crimes were his fervent belief in Jesus Christ and his public witness for that faith. Richard Wurmbrand exposed the persecution of Christians by atheistic Communist governments—his testimony shocked the Western world.

With over 10 million copies in 60 languages, this is an inspiring true story of faith that every Christian should read.

In addition to the classic story, this 50th anniversary edition features:

Pastor Richard Wurmbrand, whose body bore the scars of 14 years of torture and suffering for Christ in a Communist prison, witnessed the indomitable courage and persistent faith of persecuted Christian believers. Following his release from prison, he devoted his life to being a voice for persecuted Christians so others in the body of Christ might serve them and be inspired by their examples of bold faith.

When you have read this book, pass it to your children. No generation should miss this story. Rob Parsons It's a Christian classic. Approach with prayer. It could change your life. Rob Frost This book was singularly instrumental in awaking the conscience of the free world to the horrors experienced by our brothers and sisters behind the iron curtain. I remember reading the book many years ago and being deeply moved and convicted. Millions of others were as well. Charles W. Colson, Prison Fellowship Ministries Tortured for Christ made an impact on my life as a recently converted teenager in the sixties. I welcome this new edition of Tortured for Christ and pray that its story will shake many twenty first century Christians out of their complacency towards those who around the world today are still tortured for their Christian witness. Rev John S. Smith, UK Director, Evangelical Allian