Items related to The Singer/The Song/The Finale (The Singer Trilogy... 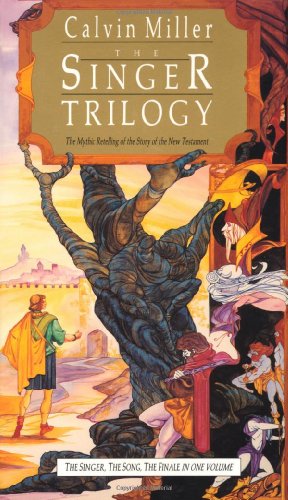 Hundreds of thousands have already thrilled to this extraordinary retelling of a life unmatched in human history. Through the story of the Singer, his Song and his battles with the World Hater, Calvin Miller has created a work full of life. Now you can find the complete, powerful tale of incarnation and redemption in one volume, with all three of Calvin Miller's books together: The Singer, The Song and The Finale. The Singer quickly became a favorite of evangelists, pastors, artists, students, teachers and readers of all sorts when it was originally published in 1975. Recounting the story of Christ through an allegorical and poetic narrative of a Singer whose Song could not be silenced, Miller's work reinvigorated Christian literature and offers believers and seekers everywhere a deeply personal encounter with the gospel. This magnificent reimagining of the story of Christ and his church gives young and old alike the opportunitiy to be immersed in the good news.

About the Author:
Calvin Miller (1936-2012) was a professor at Beeson Divinity School. The beloved author of more than forty books, Miller was also well known as a poet, artist, novelist and speaker. His later works included Preaching (Baker), O Shepherd Where Art Thou? (Broadman Holman) and Conversations with Jesus (Harvest House). He summed up his rule of life in four words: "Time is a gift."
Review:
"While Pilgrim's Progress is an allegory of the Christian life, The Singer is an allegory of Scripture itself. Calvin Miller, a Southern Baptist pastor and professor, walks readers through the story of Christ in this allegorical tale for young and old alike." (Towers, SBTS, December - January 2015)