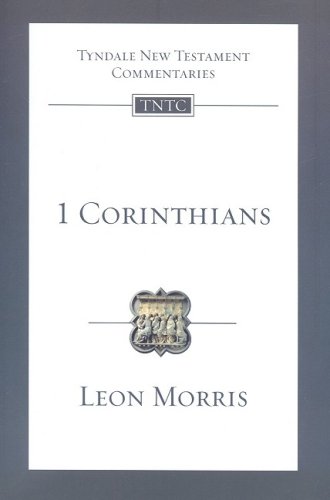 The cosmopolitan city of Corinth was the site of one of Paul's greatest evangelistic successes. Yet despite Paul's having founded the church there, it was full of contention and strife. Dissension ran the gamut from questions about leadership to incest. Some believers were taking fellow Christians to court. There were questions about marriage, celibacy, food offered to idols, public worship and spiritual gifts. In response Paul offered to them, and to us, some of his most profound thinking on the body of Christ, love and the resurrection. Leon Morris, with his characteristic clarity and pastoral heart, sets the issues before us and offers perspectives on the letter's perennial relevance. The original, unrevised text of this volume has been completely retypeset and printed in a larger, more attractive format with the new cover design for the series. The Tyndale New Testament Commentaries have long been a trusted resource for Bible study. Written by some of the world's most distinguished evangelical scholars, these twenty volumes offer clear, reliable and relevant explanations of every book in the New Testament. These Tyndale volumes are designed to help readers understand what the Bible actually says and what it means. The introduction to each volume gives a concise but thorough description of the authorship, date and historical background of the biblical book under consideration. The commentary itself examines the text section by section, drawing out its main themes. It also comments on individual verses and deals with problems of interpretation. The aim throughout is to get at the true meaning of the Bible and to make its message plain to readers today.

Leon Morris (1914-2006), one of the leading evangelical New Testament scholars of the twentieth century, served as principal of Ridley College in Melbourne, Australia. He was the author of more than forty works, including The Apostolic Preaching of the Cross, The Atonement, and comprehensive scholarly studies on Matthew, Luke, John and Romans. He was the general editor of the Tyndale New Testament Commentaries and wrote the volumes in that series on Luke, 1 Corinthians, 1 & 2 Thessalonians and Revelation.

"The Tyndale volumes have long been the premier shorter-length commentary series on both Testaments throughout the English-speaking world." (Craig Blomberg, Denver Seminary)

"Tyndale commentaries are always useful, not least because they focus so clearly on the text of Scripture, and do not fall into the trap of paying too much attention to other commentaries and not enough to the scriptural text they are intended to expound and explain. So they retain their usefulness for preachers, Bible study leaders and for all readers of the Bible." (Peter Adam, principal, Ridley College, Melbourne, Australia)

"Within its constraints, this series includes some outstanding volumes." (D. A. Carson, Trinity Evangelical Divinity School)

"There simply is no series of medium-length commentaries that approaches the excellence of the Tyndale commentaries." (Donald A. Hagner, Fuller Theological Seminary)

"The evenness and quality of this series are remarkable." (Christianity Today)