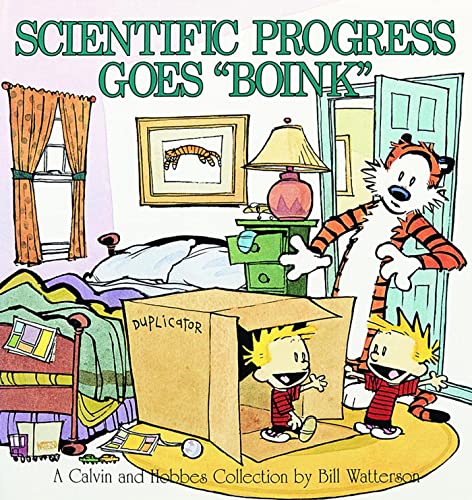 Calvin and Hobbes touched the hearts (and funny bones) of the millions who read the award-winning strip. One look at this Calvin and Hobbes collection and it is immediately evident that Bill Watterson's imagination, wit, and sense of adventure are unmatched.

In this collection, Calvin and his tiger-striped sidekick Hobbes are hilarious whether the two are simply lounging around philosophizing about the future of mankind or plotting their latest money-making scheme. Chock-full of the familiar adventures of Spaceman Spiff, findings of Dad's popularity poll, and time travel to the Jurassic Age, Scientific Progress Goes "Boink" is guaranteed to set scientific inquiry back an eon—and advance the reading pleasure of all Calvin and Hobbes fans.

Bill Watterson is the creator of Calvin and Hobbes, one of the most popular and well-regarded cartoon strips of the twentieth century. Calvin and Hobbes appeared in newspapers from November 1985 until Watterson's retirement in 1995.

Bill Watterson has caught the wild and often frustrated imagination of youngsters and set it in the context of two knowing but resigned parents in an appealing strip cartoon. * NORTHERN ECHO * Just enjoy. * GLASGOW HERALD *