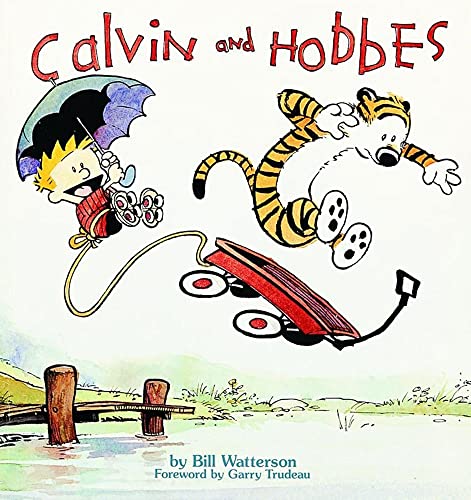 The first book collection of the classic and beloved Calvin and Hobbes comic strip!

"Most people who write comic dialogue for minors demonstrate surprisingly little feel for—or faith in—the original source material, that is, childhood, in all its unfettered and winsome glory. It is in this respect that Bill Watterson has proved as unusual as his feckless creations, Calvin and Hobbes. Watterson is the reporter who's gotten it right; childhood as it actually is."—Garry Trudeau, from the Foreword

This is the first collection of the classic comic strip that features Calvin, a rambunctious 6-year-old boy, and his stuffed tiger, Hobbes, who comes charmingly to life. Filled with a mix of Watterson’s standard and full-page Sunday strips, this collection is sure to please fans and newcomers alike.

Bill Watterson is the creator of Calvin and Hobbes, one of the most popular and well-regarded cartoon strips of the twentieth century. Calvin and Hobbes appeared in newspapers from November 1985 until Watterson's retirement in 1995.

Calvin and Hobbes (Paperback or Softback)