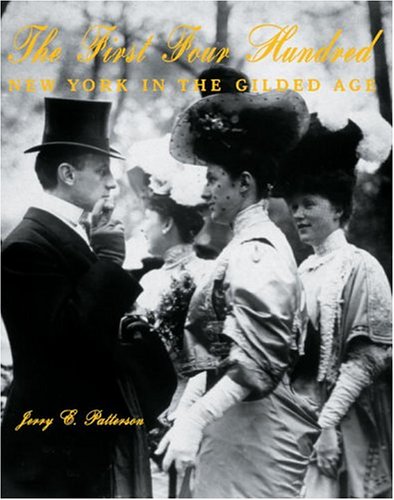 The gilded age was one of unrivalled opulence, an age of castles transported from Europe, four-hundred-foot yachts, and the great American family fortunes. Society was decorous, strict, and entirely stratified. Above all, it had but one leader, Mrs. Astor. It was she whom with the help of her friend and social confidant Ward McAllister, decided who was, and who was not, a member of Society-- a group limited to four hundred by the confines of the Astor mansion's stately ballroom.

Four years the press clamored to know who the Four Hundred were, who comprised the inner sanctum of Gilded Age Society? Mrs. Astor never in her life spoke with a journalist, but Ward McAllister often did. Famous for his flippant remarks and unwavering loyalty to Mrs. Astor and Society, he leaked the list to the New York Times in 1892. Instantly the term, "The Four Hundred," entered the national vocabulary, as a way to describe New York's hereditary elite: the Vanderbilts, the Van Rensselaers, the Goelets, the Stuyvesant Fish, the Chanlers....

Jerry E. Patterson, social historian and widely published author, brings the names on McAllister's list to life. Describing their lineage, wealth, exploits, and amusements, Patterson paints a vivid and remarkably human portrait of Gilded Age Society at its peak. In telling the story of the First Four Hundred, Patterson details the composition and lore of New York Society from the time the early Dutch settlers first broke bread through the Gilded Age and into the early part of the twentieth century. This telling history of New York's very rich is as much a history of the city itself as it is of social customs, dynamics, idiosyncrasies, and private architecture.

Jerry E. Patterson has written many books including Fifth Avenue: The Best Address, The Vanderbilts, and The Best Families: The Town and Country Social Directory, 1846-1996. He has lectured on the history of American Society, appeared on A&E's documentary The Rich in America, and is also a regular on Public Television's The Antiques Roadshow.