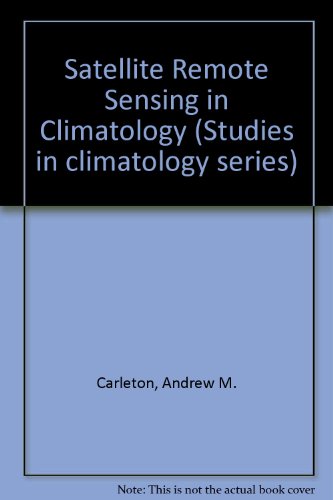 This is a monograph on satellite-based climatology and the remote sensing techniques that are used to extract climatologically-useful information. It is not intended to be a textbook in remote sensing or a text in climatology. Instead, it focuses on the overlap between these two very large bodies of knowledge. It is assumed that the reader is at least generally familiar with the basic concepts and processes giving rise to weather and climate. At the same time, he or she will not find intricate derivations of radiation transfer theory, or an orbiter-by-orbiter account of the U.S. meteorological satellite programme, or a highly detailed discussion of the inception, development and decay of E1 Nino Southern Oscillation events. While these subjects are mentioned and even discussed in context, they do not constitute the key themes emphasized in this climate research monograph. The themes involve primarily the contributions of satellite data to the development of climate theory. These topics include the role of clouds in the Earth radiation budget and in climate, the role of the Earth's surface characteristics in climate and its variations, such as desertification and drought, and the signature of climate teleconnections in clouds and cloud systems, precipation and water vapour patterns. A theme that cuts across several of these foci involves the role of satellites in monitoring the climate system and providing "baseline" climatologies within which the impact of humans might be more easily discerned. The latter is increasingly part of the Global Change initiative. Examples of the ways in which satellite data have played, and continue to play a major role in the monitoring of the climate system for anthropogenic impacts are in issues such as stratospheric ozone depletion, global warming, and deforestation.

Book Description Hard Cover. Condition: Fine. Dust Jacket Condition: Near Fine. This is a very clean copy. It is NOT ex-library. No marks. Light wear to DJ. Seller Inventory # 004901

Book Description Hardcover. Condition: Fine. Item is in like new condition with minor shelf wear. Might have a remainder mark or slight wear from sitting on the shelf. Seller Inventory # DS-084937720X-1