Items related to The Prayer of Jabez for Young Hearts 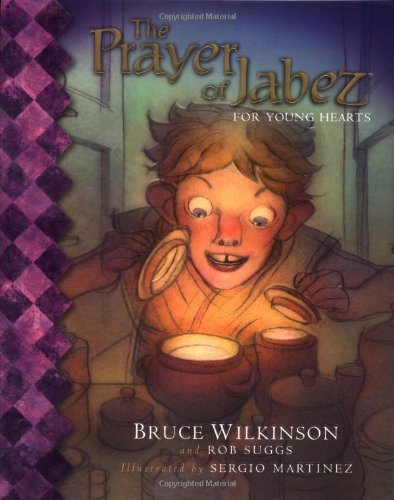 Retells, in the form of a rhyme, the Old Testament story of Jabez, who learned how powerful prayer can be.

BRUCE WILKINSON, author of best-selling, The Prayer of Jabez, and the founder and president of Walk Thru the Bible Ministries, is one of the most respected and sought-after Bible teachers in the world today. Under his leadership, Walk Thru the Bible's ministry has grown to include more than 4,000 Bible teaching seminars every year, numerous video series translated into multiple languages, and a publishing ministry which includes books, Bibles, and distribution of more than 100 million devotional magazines.

Bob Singleton is a Grammy-nominated and multi-platinum album award-winning producer, composer and arranger. His music work includes over 70 PBS episodes, over 30 albums, an NBC network special, and a sold-out Radio City Music Hall run. In the 90's, Bob became one of the top creators of music for kids in the USA. He was a music director on Barney® and Friends for 10 years, and his music for Barney is still heard in over 100 countries, worldwide. He produced over 30 albums for children, gathering a Grammy nomination, 4 Dove nominations, a triple platinum album and a platinum album.

Martha Bolton is an Emmy nominated and Dove nominated lyricist. In addition to her music credits, she is also the author of over 50 books of humor and inspiration, was a staff writer for Bob Hope for over 15 years, and writes the popular Cafeteria Lady column for Focus on the Family's BRIO magazine.

PreSchool-Grade 3-Several adult and children's versions of the best-selling Prayer of Jabez book are currently on the market. The basis for the books (and other related products) is the shepherd Jabez's prayer in the Bible (I Chronicles 4:10). In his prayer, Jabez asks God to "bless him-enlarge his territory-and keep him from evil." This reading of the thoughtfully poetic book Prayer of Jabez for Young Hearts is combined with eight songs written by award-winning Barney songwriter Bob Singleton and Martha Bolton. Three of the songs, "God Is So Good," "Cast Your Burden," and "Joyful, Joyful, We Adore Thee" will be familiar to most listeners. The others, original songs specifically written for this project, appropriately reinforce the book's text. The mostly synthesized songs are pleasantly presented by adult and children singers. A varied playlist includes everything from melodic prayerful songs to the syncopated, calypso styled "Cast Your Burden.: Following the stereo version is a split track version for easy sing-alongs. Bruce Wilkinson, the author of the Jabez books, narrates. The Jabez books have received quite a bit of criticism in some Christian circles for calling attention to what some see as a selfish, minor prayer, and the market seems a bit saturated with tie-ins. This particular title, though, is nicely produced, and is appropriate for general listening, church school lessons, and church performances. Patrons who have enjoyed the balance of the series will appreciate this audio version for children.
Kirsten Martindale, Buford Academy, GA
Copyright 2002 Reed Business Information, Inc.

The Prayer of Jabez for Young Hearts Wilkinson, Bruce

Book Description Condition: New. Retells, in the form of a rhyme, the Old Testament story of Jabez, who learned how powerful prayer can be. Seller Inventory # 9780849979323