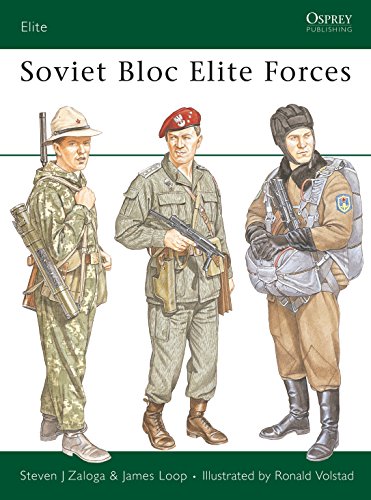 The elite forces of the Soviet Union and its Warsaw Pact allies in the mid-1980s were undoubtedly the largest in the world, and among the least known. The Soviet elite formations alone had a total strength comparable to that of the entire British armed forces. Besides the conventional military elite formations such as airborne and marine forces, most Warsaw Pact armies also possessed special, 'political' elite, which were used for internal security. Backed by numerous photographs and illustrations, this book uncovers the history, organization and equipment of both the conventional Soviet elite formations and the often ignored security units.

An unrivalled illustrated reference source on fighting men and commanders, past and present. Each volume is packed with full colour artwork, making military history uniquely accessible to enthusiasts of all ages.

Steven J. Zaloga was born in 1952. He received his BA in history from Union College and his MA from Columbia University. He has published numerous books and articles dealing with modern military technology, especially armoured vehicle development. His main area of interest is military affairs in the former Soviet Union and Eastern Europe in the Second World War, and he has also written extensively on American armoured forces. James Loop has co-authored a number of books of modern military equipment. A former United States Army officer, he was seriously wounded in Vietnam. He retired with the rank of lieutenant-colonel and now works as a defence analyst.