Items related to The Battle of Huertgen Forest: The Untold Story of...

Whiting, Charles The Battle of Huertgen Forest: The Untold Story of a Disastrous Campaign

The Battle of Huertgen Forest: The Untold Story of a Disastrous Campaign 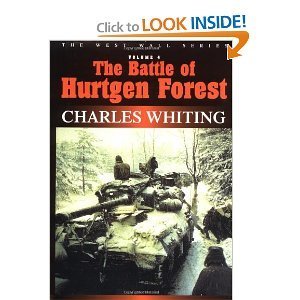 Between September 1944 and February 1945, 30,000 GIs were either killed or wounded in the longest battle ever fought by the US Army. In this book the author examines the issues involved in an engagement that was censored and omitted from official memoirs at the time. American generals continued pouring men into the Hurtgen Forest after eight infantry and two armoured divisions had failed to dislodge German troops from a network of concrete emplacements among the trees. There was a 50% casualty rate and whole battalions broke down from terror and exhaustion.

Charles Whiting served with a reconnaisance outfit in WWII and has since become one of the premier historians of the war. Among his many best-selling works are Patton, The Last Assault, and Death on a Distant Frontier. He currently lives in York, England.

From September 1944 to February '45, in the longest battle ever fought by the U.S. Army, division after division were sent into the Hurtgen Forest on the Belgian-German border. By the time the smoke cleared, nearly 30,000 GIs had been killed or wounded. Whiting makes it painfully clear that the battle of Hurtgen was unnecessary and had more to do with the maintenance of high-level reputations than strategic imperatives. He argues that Hurtgen was the forerunner of an attitude that became pervasive in Vietnam, where "generals were still throwing away the lives of their young soliders with the same careless abandon." Whiting ( Bloody Aachen ) describes the battle with a sure hand; there is plenty of heroism on these pages, but little glory. As he points out, the only soldier of Hurtgen remembered today is "the one who ran away": Pvt. Eddie Slovik, the first American soldier executed for desertion since the Civil War. Photos.
Copyright 1989 Reed Business Information, Inc.

1. The Battle of Huertgen Forest: The Untold Story of a Disastrous Campaign Whiting, Charles