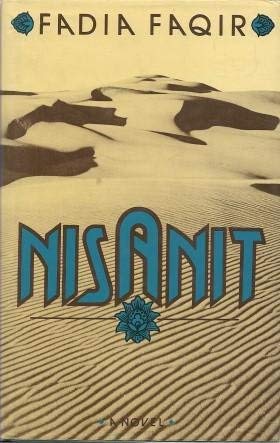 A powerful socio-political novel, Nisanit, depicts love, compassion, sacrifice, suffering and lost innocence in an atmosphere of conflict, hatred and oppression. Nisanit's three entwined narrative lines show the Arab-Israeli conflicts through the eyes of Shadeed, the Palestinian guerrilla fighter; David, his Israeli interrogator; and Iman, the young Arab woman in love with Shadeed. The three main characters are seen as vicitms of history and geography who are grappling with the human cost of the Arab-Israeli and Arab-Arab conflicts.

Faith and Fanaticism, the psychology of torturer and tortured, the question `Is love a consolation?' Fadia Faqir dramatizes all these themes in her tremendous first novel, a masterpiece of artistry and passion.

Fadia Faqir is a Jordanian/British writer, independent scholar and defender of human rights. Her first novel, Nisanit, was published by Penguin in 1990 and is currently being translated into Arabic. Her second novel, Pillars of Salt, was published by Quartet Books in 1996, and was translated into German, Dutch and Danish. The Danish translation was the runner up for the ALOA literary award 2001. She is the editor and co-translator of In the House of Silence: Autobiographical essays by Arab women writers, Garnet Publishing, 1998, translated into Turkish. She was the senior editor of the Arab Women Writers Series, Garnet Publishing, for which she received the 1995 New Venture Award. She is a member of the Board of Al-Raida, a feminist journal published by the Lebanese American University, Beirut. Fadia Faqir has written a few short stories and plays. `The Separation Wall', a short story, and `Sofia Blues', a collection of meditations, were published in a collection entitled Magnatic North, New Writing North, December, 2005. `The Separation Wall' will also be published in Dominican Literature and Arab-American and Arab Anglophone Literature edited by Nathalie Handal. Her third novel My Name is Salma is published by Doubleday and will be published in Canada, USA, Denmark, France, Spain and Italy.

Book Description Condition: Fair. This is an ex-library book and may have the usual library/used-book markings inside.This book has hardback covers. In fair condition, suitable as a study copy. No dust jacket. Please note the Image in this listing is a stock photo and may not match the covers of the actual item,500grams, ISBN:0856281697. Seller Inventory # 8503538

Shipping: US$ 14.82
From United Kingdom to U.S.A.
Destination, rates & speeds

Shipping: US$ 19.98
From United Kingdom to U.S.A.
Destination, rates & speeds