Items related to Visual Methodologies: An Introduction to Researching...

Visual Methodologies: An Introduction to Researching with Visual Materials 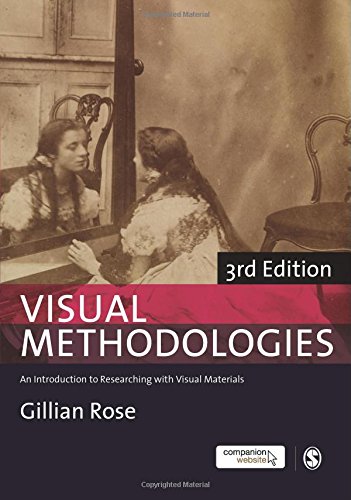 The Third Edition of An Introduction to Researching with Visual Materials, a bestselling critical introduction to the study and analysis of visual culture, has been fully revised and updated. Each chapter retains its rigorous examination and demonstration of an individual methodology, while continuing to be clear in structure and lucid in style. Reflecting changes in the way society consumes and creates its visual content, new features include a companion website featuring additional examples of digital and social media and moving images, pedagogical enhancements, additional chapters and expanded coverage on social and new media, and how to use visual materials for research and research presentation, and an expanded focus on how each method can be used in relation to a range of different visual materials.

A now classic text, the book appeals to undergraduates, graduates, researchers and academics in all subjects looking to understand and clearly grasp the complex debates and ideas in visual analysis and interpretation.

My research interests lie broadly within the field of visual culture. I′m interested in visuality as a kind of practice, done by human subjects in collaboration with different kinds of objects and technologies.

One long-term project, which resulted in a book from Ashgate Press in 2010, looked at family photos. I approached family snaps by thinking of them as objects embedded in a wide range of practices. I interviewed women with young children about their photos, and also looked at the politics and ethics of family snaps moving into more public arenas of display when the people they picture are the victims of violence. The book explores the different ′politics of sentiment′ in which family snaps participate in both their domestic spaces in the public space of the contemporary mass media.

Other work is extending my interest in subjectivities, space and visual practices by exploring experiences of designed urban spaces. I completed an ESRC-funded project on this theme with Dr Monica Degen at Brunel University in 2009, in which we compared how people experienced two rather different town centres: Milton Keynes and Bedford. Monica Degen, Clare Melhuish and I started a new ESRC-funded project in the autumn of 2011. ′Architectural atmospheres, branding and the social: the role of digital visualizing technologies in contemporary architectural practice′ was a two-year ethnographic study of how digital visualizing technologies are being used by architects in a number of architects′ studio in London.

If you need to carry out research into visuals then Rose′s book provides straight forward practical assistance for how to do so. Along with a history of this emerging field she explains clearly how we can deal with the visual from diverse approaches such as content analysis, semiotics, psychoanalysis and discourse analysis, all explained carefully, using examples, in terms of the stages of a research project. This new edition will be key material for undergraduate studies
David Machin
Cardiff University

Clear, comprehensive, theoretically informed, and up to date, Visual Methodologies is an excellent guide to the rapidly growing field of visual research
Theo van Leeuwen
University of Technology, Sydney

Substantially updated to include a wide range of visual media examples, Gillian Rose′s Visual Methodologies remains the authoritative introductory text on the methods of visual research. Conveying the richness and excitement of visual culture research, Rose expertly navigates across a range of methodologies, explaining in detail their particular usefulness and limitations through practical examples. For anyone already familiar with Visual Methodologies, this third edition offers a significant reworking of previous content, to include developments in the field of audience/fan cultures, digital media, ethics and image production as research practice. As such, Rose demonstrates the evolving nature of visual research and its methods, and reminds us of the passion involved in its study. It is a must buy for students and scholars alike
Julie Doyle
Principal Lecturer in Media Studies, University of Brighton

As of its first edition Visual Methodologies established itself as one of the better books to obtain a well-balanced introductory overview of different approaches to visual analysis and each revision further adds to its quality.

Rose′s book is mainly (except for one chapter) focused on methodologies for analyzing ′found′ or pre-existing images (as opposed to producing visual data or analyzing visual phenomena that are not images) but it does that in a very systematic and practical manner, clearly highlighting the exact modus operandi as well as the specific strengths and weaknesses of each of the methods or analytical frameworks. Of particular value is the attention devoted to mixing different methods, as far too often methods and theories are presented as distinct and even incompatible options
Luc Pauwels
Professor of Visual Studies, University of Antwerp

An accessible text book that provides the student of visual culture necessary tools and insights on how to analyze images. The book is unique in bridging a wide range of methodologies from the humanities and the social sciences. Rose′s in-depth and systematic discussion of theories and methods, as well as masterful handling of case studies and examples, will provide the reader with a valuable overview
Anneke Smelik
Professor of Visual Culture, Radboud University Nijmegen

Gillian Rose has provided a welcome overview of the state of the field. Visual Methodologies succeeds both as an introductory text, certain to be widely adopted in the classroom, and as a sophisticated refresher course for those who have followed the rapid maturation of this remarkable interdisciplinary discourse
Professor Martin Jay
University of California, Berkeley

1. Visual Methodologies: An Introduction to Researching with Visual Materials

2. Visual Methodologies: An Introduction to Researching with Visual Materials