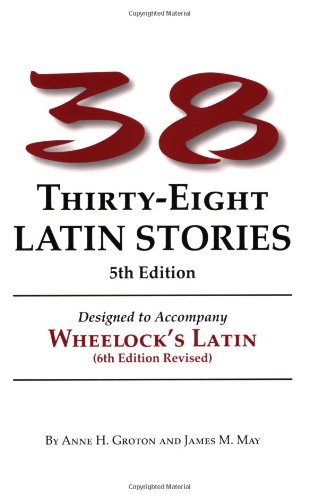 Though intended as a supplement to Wheelock's Latin, this book is well suited for use in any introductory Latin course. All the stories in the book are based on actual Latin literature, with the stories simplified at first and made gradually more complex as the work progresses. Students will learn how classical Latin was really written as they become familiar with the works of the great Latin authors.

For over 30 years Bolchazy-Carducci Publishers has produced the highest quality Latin and ancient Greek books. From Dr. Seuss books in Latin to Plato's Apology, Bolchazy-Carducci's titles help readers learn about ancient Rome and Greece; the Latin and ancient Greek languages are alive and well with titles like Cicero's De Amicitia and Kaegi's Greek Grammar. We also feature a line of contemporary eastern European and WWII books.

Some of the areas we publish in include:

James M. May received his Ph.D. from the University of North Carolina at Chapel Hill and is currently Professor of Classics and Associate Dean for Humanities at St. Olaf College in Northfield, Minn. In addition to 38 Latin Stories, May is author of several articles and books, including Trials of Character: The Eloquence of Ciceronian Ethos. He has served as Vice-President for Education of the American Philological Association and as President of the Classical Association of the Middle West and South. In 1986 he was the winner of the American Philological Association's Award for Excellence in the Teaching of the Classics.

Anne H. Groton earned her Ph.D. in Classical Studies at the University of Michigan and has taught since 1981 at St. Olaf College, where she is Professor of Classics and chairs the Department of Classics. In addition to 38 Latin Stories, she is author of several articles on ancient comedy as well as From Alpha to Omega: A Beginning Course in Classical Greek. Every other year she directs a student production of a play by Plautus, performed in a musical mixture of Latin and English. In 1995 she received the American Philological Association's Award for Excellence in the Teaching of the Classics.