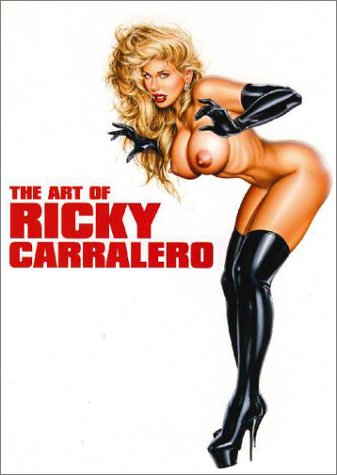 With images of searing beauty, Ricky Carralero's erotic portraits are so hot they almost glow! Like a Varga for the new millennium, Carralero's pin-up girls are pure spice with just a hint of sweet! Best known for his work on the mega-selling 'Double Impact' line of comics and merchandise, Ricky Carralero's extraordinary ability to illustrate the ultimate in fantasy females is putting him on the fast-track of absolute fan favourites! Born in Cuba in 1969, his family finally made it to the States in the mid-Eighties, and Ricky drank in all the images of mindless sex and violence his new country had to offer - and gave back so much more! This massive full colour collection of his paintings is an oversized tome of titillation, with every portrait suitable for framing! If you're an ardent admirer of the pin-up, then here's a showcase that'll have you acting like a Tex Avery Wolf! Be warned however - the cover art is one of the tamer pieces! Yeeouch!

Born in Cuba in 1969, Ricky showed an affinity for illustration at a young age, studying a talented neighbor's painting skills. By 1983, the Carraleros made it to the United States, and Ricky's artistic abilities made the transition to an English-speaking country much easier. With a fascination for comic books, the young Carralero haunted comic conventions, showing off his portfolio to any prospective publisher. Finally, with the aid of a fellow enthusiast (plus a sizable bankroll from Ricky's parents, who mortgaged their home!), Carralero debuted ?Double Impact? comics in 1994. Featuring the exploits of two buxom adventurerers ?China? and ?Jazz?, this independent title rode the crest of a tidal wave of new comics, and put Carralero on the map. Within a very short time, the parents were repaid, the business was on solid ground, and Ricky Carralero was a well-known fan favorite. The artist now concentrates on the craft of painting, still keeping his focus on impossibly-beautiful women with gravity-defying bodies. His works fetch gallery prices, and are much sought-after in the fantasy art market.

1. The Art of Ricky Carralero