Items related to The River Ki 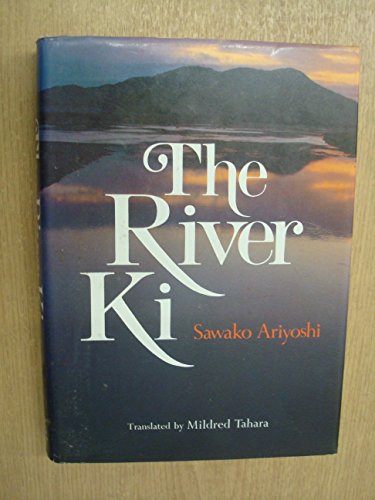 Sawako Ariyoshi was born in 1931 in Wakayama City. As a student she developed a deep interest in the theater, both modern drama and traditional Kabuki, and her own plays are widely performed in Japan. Many of her novels have also been adapted for the stage, the cinema, and television.

Ariyoshi first rose to prominence in the 1950s as a writer of short stories, but has since built an impressive reputation as a novelist dealing with crucial social issues. Among her themes have been the problems faced by women in the traditional Japanese household (Hanaoka seishu no tsuma, 1967, translated as "The Doctor's Wife"), racial segregation in the United States (Hishoku, 1964), and environmental pollution (Fukugo-osen, 1975). Her Kokotsu no hito (The Twilight Years) was published in 1972 and sold over a million copies in less than a year.

Translations of her books have appeared throughout the world and include a French translation of The Doctor's Wife, which was a bestseller in France in 1981; The River Ki; The Twilight Years; Her Highness Princess Kazu, awarded the prestigious Mainichi Cultural Prize in 1979; and Kabuki Dancer.

The morning mist slowly cleared and the sun began to shine. "Look! The river is such a lovely shade of green!"

The sparkling expanse of celadon green extended before the eyes of the women, who had come out of the Miroku Hall to begin their descent of the stone steps on the east of the temple.

Hand-in-hand the two women descended the stone steps, where they were immediately surrounded by the people who had been waiting for them. The boats were ready to depart. It seemed that everyone in Kudoyama Village and Jison-in Village had turned out to see the bride off.

Saki, the hairdresser, rushed up to adjust Hana's hair. Toku went to open the door of the palanquin which had been set down near the landing. That very convenient vehicle, the ricksha, had recently been introduced to Japan but, in keeping with the status of the family, a lacquered palanquin was used for the bride.

"My very best wishes," said Toyono formally. Hana looked down wordlessly. She drew her sleeves to her and got into the palanquin. Toku carefully placed a doll on her mistress' lap, as it was the custom in this part of the country for a bride to set out for her new home carrying an Ichimatsu doll.

The two palanquin bearers, ordered from Wakayama City, gave a loud shout as they lifted the palanquin in which Hana was seated and carried it aboard the boat moored at the landing. They set the palanquin down in the middle of the boat and stationed themselves at the stern.

"A little doll," whispered the other. In the meantime the boatmen were calling out one to another.

The bride's boat left the shore. The go-betweens sat side by side like mandarin ducks in the lead boat, which had been loaded to capacity with presents for relatives and gifts sent in return for engagement presents. Toku waited on her mistress in the boat carrying Hana's palanquin, the second in the procession. Toku was fifty years old, and her face, heavily made up for the occasion, was tense. Though Ki province is relatively warm, the air over the river this early March morning chilled the women's skin, even though they were dressed in crested kimonos of silk pongee with matching sashes.

Book Description Tokyo : Kodansha International ; New York ; San Francisco : distributed in the United States through Harper & Row, 1980., 1980. Hardcover. Condition: Very Good. Dust Jacket Condition: Very Good. 1st Edition. 1st edition ; 243 pp. ; map ; 22 cm. ; ISBN: 0870113852 (Kodansha International/USA); 9780870113857 (Kodansha International/USA) LCCN: 79-66240 ; LC: PL845.R5; Dewey: 895.6/35 ; OCLC: 6644428 ; translated by Mildred Tahara. ; dark red clpoth with grey lettering, in color photographic dustjacket ; ex-lib, stamps, labels, pocket ; "The River Ki, short and swift and broad like most Japanese rivers, flows into the sea not far south of Osaka. On its journey seaward, it passes through countryside th at has long been at the heart of the Japanese tradition. And it flows too past the mountains and the villages, past the dams, ditches and rice fields that provide such a richly textured backdrop to this novel. Powerful enough to sweep away people on its banks and placid enough to carry along with its flow a sumptuous wedding procession, the River Ki dominates the lives of the people who live in its fertile valley and imparts a vital strength to the three women, mother, daughter and granddaughter, around whom this novel is built. It provides them with the courage to cope, in their different ways, with the unprecedented changes that occurred in Japan between the last years of the last century and the middle of this century. Sawako Ariyoshi , one of Japan's most successful modern novelists, describes this social and cultural revolution largely through the eyes of Hana, a woman with the vision and integrity to understand the inevitability of the death of the traditional order in Japan. Ariyoshi writes with a love for detail bound to a broader understanding of the importance of the geographical and biological forces that mold her characters--and the result is a story that flows with all the vitality of the River Ki itself."-- dustjacket ; VG/VG. Book. Seller Inventory # 4761