Items related to The Early Days in Jackson Hole

The Early Days in Jackson Hole 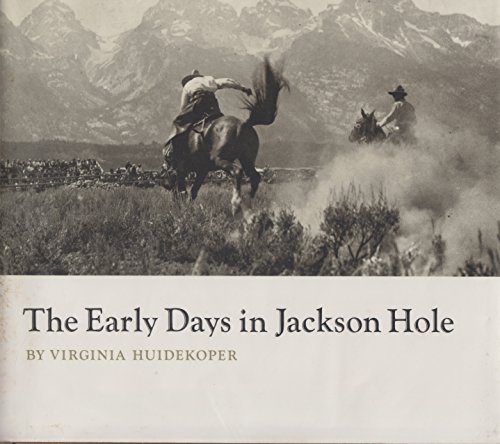 The human history of Jackson Hole is a story of how a country of great natural beauty was used, treated, and in some areas, preserved. This story is shown in over 150 black and white photographs. Many of the photographs are from established archives, but many came from family albums and shoe boxes handed down through generations. A valuable reference book for historians and photographers, it is also an engrossing view into the past for the residents of Jackson Hole and its many visitors.

Virginia Huidekoper has lived most of her life in Jackson Hole, Wyoming. A devotion to the Teton county and its people prompted her to compose this book. "These old photographs deserve to be shown for their beauty alone," she observes, "in addition, they recount history without the bias that writers are apt to have."

Author Huidekoper has had a varied career in Jackson Hole. She co-edited the county's weekly newspaper in the mid-forties and, twenty-five years later, founded the Jackson Hole News, a paper that emphasizes photographs of the country as well as news coverage.

An avid skier, hiker and horsewoman, these pursuits have taken her to the top of many major peaks (including the Grand Teton), and into most of the backcountry surrounding Jackson Hole. She operates a ranch near Wilson where her three children grew up, "with all the advantages of rural life and the stimulation of mountain country.". Local politics and community affairs have always attracted her interest.

A professional airplane pilot for many years, Virginia claims this experience has given her a different perspective on history. "I can identify with W. H. Jackson when I look down on the ledges where he worked," she remarked.

Retired now from the newspaper business, Virginia just completed a "handmade, homegrown" log house where she expects to continue her work on historical subjects.

2. The Early Days in Jackson Hole

4. The Early Days in Jackson Hole

5. THE EARLY DAYS IN JACKSON HOLE.

Book Description Hard Cover. Condition: Fine. Dust Jacket Condition: Fine-. 131 pages, illustrated with b&w photographs. "In the decades to follow many skilled photographers arrived in the Teton country to record the spectacular beauty of natural features and wildlife. Over the years, these pictures formed a colorful history of the country, and were to influence the establishment of the National Elk Refuge and Grand Teton National Park. Recognizing the importance of these photographs, the author assembled a permanent file to be preserved in Tenton County." FINE HARDCOVER, FINE- DUST JACKET. Size: 4to - over 9ľ" - 12" tall. Seller Inventory # 027050

6. THE EARLY DAYS IN JACKSON HOLE.