Items related to The Glory of Byzantium: Art and Culture of the Middle... 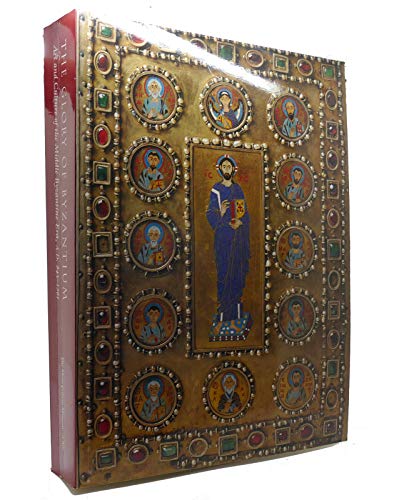 This catalogue provides the comprehensive visual and textual documentation of the landmark exhibition "The Glory of Byzantium."

The Glory Of Byzantium is a stunning, 604 page coffee-table artbook based on the exhibition of the art at the Metropolitan Museum of Art of the Middle Byzantine period beginning with the restoration of the use of icons by the Orthodox Church in 843 and ends with the occupation of Constantinople by the Crusader forces from the West and 1204 to 1261. The Glory Of Byzantium explores four interrelated themes: the religious and secular culture of the Second Golden Age of the Byzantine Empire; the empire's interaction with its Christian neighbors and rivals; its relations with the Islamic East; and its contact with the Latin West. Bringing together the contributions of 59 scholars and art historians, the text explores the complex currents of Byzantine civilization. More than 350 works of art assembled from 119 institutions in 24 countries are discussed and illustrated in the catalogue, presenting a significant selection of works that survive from the empire and from the countries that constituted its extended sphere of influence. Liturgical objects (including icons, mosaics, chalices, ceramics, jewelry, and manuscripts) reflect the dynamic nature of the art of this era both within and outside of the empire. The first half of the volume treats the historical context, the religious sphere, and the secular courtly realm of the empire; the second half focuses on the interactions between Byzantium and other medieval cultures, including Islam and the Latin West. The seventeen essays are accompanied by views of architectural sites and comparative illustrations. The Glory Of Byzantium is a highly recommended for academic or community libraries, and would be especially appropriate as a Memorial Fund acquisition selection. -- Midwest Book Review

The catalog of a major exhibition on Byzantium that just closed at New York's Metropolitan Museum of Art, this exquisitely produced volume contains essays by leading scholars that describe the objects exhibited and place them within a specific area of the Byzantine empire. Speros Vryonis Jr. leads off the collection with an essay on "Byzantine Society and Civilization." Other notable sections include Toli Kalavezou's "Luxury Objects," Jerry Folda's "Crusader Art," and S. Peter Crowe's "The Georgians." The editors' discussion of the culture of the period is quite thorough and offers new insights. The quality of the reproductions is very good, and both the extensive bibliography and the glossary are highly useful. One only wishes that the footnotes appeared at the bottom of the page rather than at the back of the volume. This work should be included in larger academic and public libraries.?Martin Chasin, Adult Inst., Bridgeport, Ct.
Copyright 1997 Reed Business Information, Inc.