Items related to For All Mankind

Hurt, Harry For All Mankind 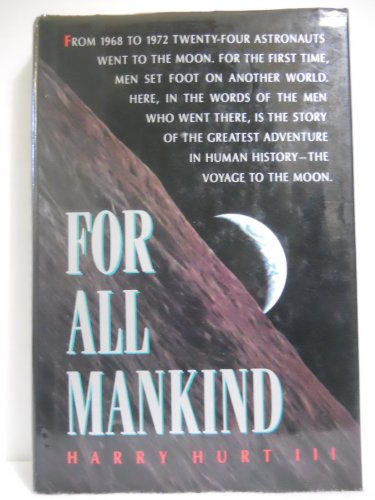 This book is 'based on extenisve research and exclusive interviews with the astronauts containing the most comprehensive and revealing firsthand accounts of space travel ever assembled. In their own words and from the perspective of over a decade of reflection, the astronauts share the sights, sounds, thoughts, fears, hopes, and dreams they experience during their incredible voyages.'

Between December 1968 and December 1972 twenty-four men went to the moon; no one has been there since. For All Mankind presents a dramatic, engrossing account of the most hazardous, dangerous and greatest adventure on which man has ever embarked. This book is based on extensive research and exclusive interviews with the astronauts which contain the most comprehensive and revealing first-hand reports of space travel ever assembled. In their own words and from the perspective of over a decade of reflection, the astronauts share the sights, sounds, thoughts, fears, hopes and dreams they experienced during their incredible voyages.

For All Mankind recounts all the drama and danger of the moon voyages. We stay with the astronauts as the tension builds through pre-launch, earth orbit, the journey through space, moon orbit, and finally down to the lunar surface. We share the anguish of Neil Armstrong and Buzz Aldrin as they come within eighteen seconds of having to abort the first landing; we enjoy with Charles Conrad and Alan Bean the intoxicating experience of working on the surface of this mysterious, alien world; and we live through the terror of Apollo 13 with Jim Lovell, Fred Haise, and Jack Swigart as they are almost lost in space.

For All Mankind is both a truly extraordinary adventure story and an important historical document relating, in the words of the men who went there, what it is like to go to the moon.

"An exhaustive overview of NASA's Apollo program, relying heavily-and successfully-on the voices of the twenty-four astronauts who went to the moon.... The meat here lies in the lunar voyage itself, an irresistible mix of danger, courage, tedium, and spectacle, evoked with unprecedented detail by those who went there."--Kirkus Reviews

"Harry Hurt's timely book is like an instant replay of the dramatic moon flight years.... Hurt tells us of the hardships and the successes of the Apollo program, the remarkable journey to the moon, of the astronauts and technicians who made it possible and the goals of the nation in space.... He masters and explains the complex technical side of the missions."--Houston Chronicle

"Irresistible yarns...underlined by the great courage of men who trusted machines, risked all and won. Hurt models their war stories into one grand collective voyage."--Chicago Tribune

"Solid and full of long-forgotten tidbits.... Mr. Hurt, in the course of 90 hours of interviews, is able to draw from [the astronauts] a broad range of emotions, from fear to tedium to exhiliration."--Washington Times

Harry Hurt III is the executive editor of T&L Golf and a contributing editor for Texas Monthly. His work has appeared in Newsweek, Texas Monthly, Esquire, Playboy, and Vanity Fair, among other publications. He has written three other books: Texas Rich, Lost Tycoon: The Many Lives of Donald J. Trump, and Chasing the Dream: A Mid-Life Quest for Fame and Fortune on the Pro Golf Circuit.

This stirring volume by Newsweek correspondent Hurt ( Texas Rich ) presents the reactions of the 24 astronauts who have been to the moon. Althugh some of them, particularly Neil Armstrong, are laconic while others are expansive, the overall effect of these accounts by Buzz Aldrin, Stuart Roosa, Alan Bean and the others is high drama, the more so in the light of the Challenger explosion in 1986. The period covered is 1968 to 1972, and the procedures involved in preparing for and executing lunar flight are presented in detail. The primary emphasis is on Apollo 11, with the initial moon landing, but the story of Apollo 13 and its near-fatal accident as well as the scientific advances made in the last three Apollo flights are also placed center stage. In addition, there are salient observations about what the Apollo program means to mankind. Photos not seen by PW. $50,000 ad/promo; author tour.
Copyright 1988 Reed Business Information, Inc.

4. For All Mankind Hurt, Harry