Items related to The Social Conquest of Earth 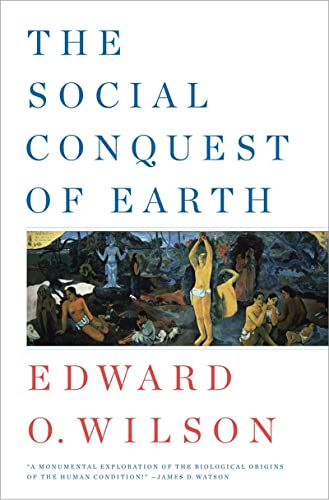 From the most celebrated heir to Darwin comes a groundbreaking book on evolution, the summa work of Edward O. Wilson's legendary career.

Where did we come from? What are we? Where are we going? In a generational work of clarity and passion, one of our greatest living scientists directly addresses these three fundamental questions of religion, philosophy, and science while “overturning the famous theory that evolution naturally encourages creatures to put family first” (Discover magazine). Refashioning the story of human evolution in a work that is certain to generate headlines, Wilson draws on his remarkable knowledge of biology and social behavior to show that group selection, not kin selection, is the primary driving force of human evolution. He proves that history makes no sense without prehistory, and prehistory makes no sense without biology. Demonstrating that the sources of morality, religion, and the creative arts are fundamentally biological in nature, Wilson presents us with the clearest explanation ever produced as to the origin of the human condition and why it resulted in our domination of the Earth’s biosphere. 90 illustrations

Edward O. Wilson is widely recognized as one of the world’s preeminent biologists and naturalists. The author of more than thirty books, including Half-Earth, The Social Conquest of Earth, The Meaning of Human Existence, and Letters to a Young Scientist, Wilson is a professor emeritus at Harvard University. The winner of two Pulitzer Prizes, he lives with his wife, Irene Wilson, in Lexington, Massachusetts.

“Wilson’s examples of insect eusociality are dazzling... There are obvious parallels with human practices like war and agriculture, but Wilson is also sensitive to the differences... This book offers a detailed reconstruction of what we know about the evolutionary histories of these two very different conquerors. Wilson’s careful and clear analysis reminds us that scientific accounts of our origins aren’t just more accurate than religious stories; they are also a lot more interesting.”
- Paul Bloom, New York Times Book Review

“... a sweeping account of the human rise to domination of the biosphere, rounded out with broad reflections on art, ethics, language and religion.”
- Jennifer Schuessler, New York Times

“Religion. Sports. War. Biologist E.O. Wilson says our drive to join a group―and to fight for it―is what makes us human.”
- Newsweek

“Wilson has done an impressive job of pulling all this evidence together and analyzing it. His interdisciplinary approach, his established scholarship, and his willingness to engage hot-button issues are all much in evidence in The Social Conquest of Earth.... His reflections on this subject are varied, original, and thought provoking―as is the rest of his book.”
- Carl Coon, The Humanist

“E. O. Wilson’s passionate curiosity―the hallmark of his remarkable career―has led him to these urgent reflections on the human condition. At the core of The Social Conquest of Earth is the unresolved, unresolvable tension in our species between selfishness and altruism. Wilson brilliantly analyzes the force, at once creative and destructive, of our biological inheritance and daringly advances a grand theory of the origins of human culture. This is a wonderful book for anyone interested in the intersection of science and the humanities.”
- Stephen Greenblatt, author of The Swerve: How the World Became Modern

“...a sweeping argument about the biological origins of complex human culture. It is full of both virtuosity and raw, abrupt assertions that are nonetheless well-crafted and captivating... it is fascinating to see such a distinguished scientist optimistic about the future.”
- Michael Gazzaniga, Wall Street Journal

“Once again, Ed Wilson has written a book combining the qualities that have brought his previous books Pulitzer Prizes and millions of readers: a big but simple question, powerful explanations, magisterial knowledge of the sciences and humanities, and beautiful writing understandable to a wide public.”
- Jared Diamond, Pulitzer-Prize-winning author of Guns, Germs and Steel

“Wilson’s newest theory...could transform our understanding of human nature―and provide hope for our stewardship of the planet.... [His] new book is not limited to the discussion of evolutionary biology, but ranges provocatively through the humanities.... Its impact on the social sciences could be as great as its importance for biology, advancing human self-understanding in ways typically associated with the great philosophers.”
- Howard W. French, The Atlantic

“A monumental exploration of the biological origins of the Human Condition!”
- James D. Watson

“The Social Conquest of Earth is a huge, deep, thrilling work, presenting a radically new but cautiously hopeful view of human evolution, human nature, and human society. No one but E. O. Wilson could bring together such a brilliant synthesis of biology and the humanities, to shed light on the origins of language, religion, art, and all of human culture.”
- Oliver Sacks

Shipping: US$ 5.41
From United Kingdom to U.S.A.
Destination, rates & speeds

Shipping: US$ 20.33
From United Kingdom to U.S.A.
Destination, rates & speeds