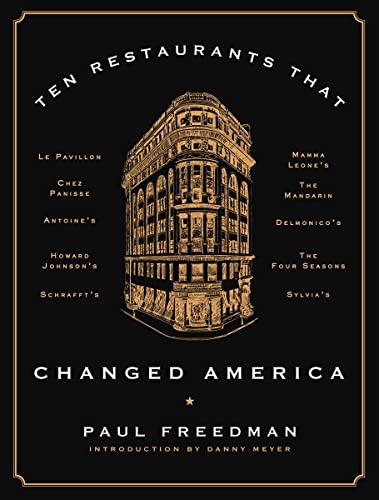 From Delmonico’s to Sylvia’s to Chez Panisse, a daring and original history of dining out in America as told through ten legendary restaurants.

Combining a historian’s rigor with a foodie ’s palate, Ten Restaurants That Changed America reveals how the history of our restaurants reflects nothing less than the history of America itself. Whether charting the rise of our love affair with Chinese food through San Francisco’s fabled The Mandarin, evoking the richness of Italian food through Mamma Leone’s, or chronicling the rise and fall of French haute cuisine through Henri Soulé’s Le Pavillon, food historian Paul Freedman uses each restaurant to tell a wider story of race and class, immigration and assimilation. Freedman also treats us to a scintillating history of the then-revolutionary Schrafft’s, a chain of convivial lunch spots that catered to women, and that bygone favorite, Howard Johnson’s, which pioneered midcentury, on-the-road dining, only to be swept aside by McDonald's. Lavishly designed with more than 100 photographs and images, including original menus, Ten Restaurants That Changed America is a significant and highly entertaining social history. 95 images

Paul Freedman is a history professor at Yale University and the acclaimed author of Ten Restaurants That Changed America, which was named a Washington Post Notable Book of the Year and praised as “essential” by the Wall Street Journal Magazine. He lives in Pelham, New York.

“Reading Paul Freedman about America, stalking myself through the taste of meals at eight of his ten restaurants, each sampled for different reasons at different moments in my life, I began to draw the outlines of a world I shared with other people, people more or less like me, and to wonder what ‘like me’ meant when it came to expectations of inclusion, of common flash points of reference, of understanding and participating in the coded language of what we eat and how it is prepared and who is sitting at all those tables around us. I think that’s what Freedman intended us to do. . . . Ten Restaurants is a book as much about the contradictions and contrasts in this country as it is about its places to eat. It is designed to keep you up, thinking, and, as I did this summer, returning to its rich, and often troubling, pages.”
- Jane Kramer, The New Yorker

“Fascinating. . . . In his sweep through centuries of food culture, Freedman illuminates much more than what happened in the front or back of the house of these 10 distinct places (although he does plenty of that). He effectively makes the case that the story of America’s restaurants is one of changing immigration patterns, race relations, gender and family roles, work obligations, and leisure habits. . . . [Freedman’s] insights are shrewd and demonstrate the power of historical study in understanding the world.”
- Joe Yonan, Washington Post

“Impeccable . . . . Inevitably, a book like this will induce a feast of delicious nostalgia in most readers, a longing for all those good ― and even some not so good ― menus and dishes past. But the culinary and cultural journey Mr. Freedman has taken us on demonstrates the abiding qualities in our society ― its openness to new sources and sourcing, its diversity, its restlessness with the same old thing, its capacity for reinvention and assimilation ― all of which bode well for the future of America’s restaurants and its cuisine.”
- Martin Rubin, Washington Times

“Eminently readable. . . .In a narrative that is intellectually delicious, Freedman presents a new way of thinking about ‘you are what you eat.’ This will appeal widely, engaging readers with both a casual or scholarly interest in food history and its influence on American culture in the late 19th and 20th centuries.”
- Courtney McDonald, Library Journal

“A robust historical trek through America's restaurant cuisine over three centuries. . . . Delightfully illustrated with menus, photos, and other visual accompaniments, the narrative delves into each of the 10 restaurants' unique stories, beginning with America's first restaurant, Delmonico's . . . . Culinary historians, those besotted with food culture, and curious general readers will all find something of value in this well-researched, entertaining social and cultural history.”
- Kirkus Reviews

“The most important and entertaining book on the subject of food that I’ve read in years! Paul Freedman paints a portrait of a culture whose cuisine is only beginning to emerge. Witty, sensitive, surprisingly sensuous―more, please!”
- Molly O'Neill, author of One Big Table

“Paul Freedman, one of the world’s most learned food writers, has focused his extraordinary scholarship on a deconstruction of American dining from the corner deli to Chez Panisse. If you enjoy a brown paper bag of fried clams as much as a fourteen-course tasting menu, and ever wondered how it all came to be a part of daily American life, this is the book for you. Ten Restaurants That Changed America is the most enlightening kind of history, as Freedman takes a fresh look at what we take for granted and reveals the extraordinary matrix of cultural and culinary currents that have made it all possible.”
- Frederick Kaufman, author of Bet the Farm: How Food Stopped Being Food

“Spanning over 100 years, Paul Freedman’s engrossing and well-researched exploration of the restaurant as an American institution presents us with a gallery of unforgettable characters, iconic dishes, and unique places. Immigrants, entrepreneurs, chefs, and impresarios all loom large in a narrative that accurately tracks the historical changes in how we eat in public.”
- Fabio Parasecoli, director of Food Studies Initiatives, The New School